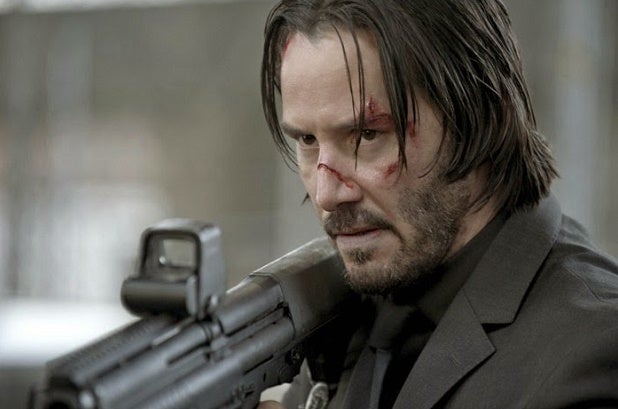 This weekend’s explosive opening of “John Wick” provided a “How you like me now?” moment for its star Keanu Reeves, and a financial coup for Lionsgate’s Summit Entertainment.

The R-rated action thriller about a hit man who comes out of retirement to avenge his murdered wife — and beagle — took in $14.1 million in its opening this weekend. That isn’t a blockbuster number, but it’s nearly double the projection of some analysts and more than $5 million better than the debut of Reeves’ last film, the 2013 mega-bomb “47 Ronin.”

Lionsgate acquired the rights to “John Wick” this summer, after several other studios passed, in return for mounting the marketing campaign for the wide opening. There was no acquisition fee and no minimum guarantees, but to capitalize, Lionsgate had to move quickly.

“We loved this movie from the first time saw it,” Jason Constantine, Lionsgate’s president of acquisitions and co-productions, told TheWrap Sunday. That was when the Thunder Road Pictures-MJW Films project produced by Basil Iwanyk (“The Expendables”) and Mike Witherill was screened for the studios by Creative Artists Agency in July.

“It was cool, hip and fun and the kind of action movie that we’re known for,” he said. The deal came together in a hurry, and roughly two weeks later, things began to move even more quickly.

That opened up this weekend, when the main competition would be “Ouija,” which skewed young and female — the opposite of the demo target for “John Wick.”

But that meant mounting a campaign in just 11 weeks.

“It had to be a total team effort and it was,” said Constantine. “It was perfect for us, because we’re big enough to pull it off, but small enough so that we were able to be nimble.”

Tim Palen’s marketing team rushed out an online trailer that hit the bulls-eye, and was cited by this weekend’s audiences as a top reason they came out to see the film. And “John Wick” got a huge boost when it made its world premiere in September at the Fantastic Fest in Austin, Texas.

“We were there with Keanu and all the rest of the cast and honestly, it was like a rock concert,” Constantine recalled. The critics were as enthused as the crowd, and the action thriller came out of the festival with a 100 percent “fresh” rating on Rotten Tomatoes, which set off a storm of positive online buzz.

“You have to give a lot of credit to Keanu, and the rest of the cast, who worked incredibly hard to promote this film,” said Constantine. Willem Dafoe, Adrianne Palicki, John Leguizamo, Bridget Moynahan, Michael Nyqyit and Ian McShane co-starred.

The decision to gamble on Keanu and his up-and-down box-office resume was made easier because Lionsgate had worked with co-directors David Leitch and Chad Stahelski, both former stunt men, in the past. Stahelski had coached Reeves on the blockbuster “The Matrix,” and been a second-unit director on “The Expendables,” another Lionsgate action film that launched a franchise.

The positive response from the critics provided early momentum for publicity and marketing to build on, and “John Wick” got a major boost from a video game tie-in.

Peter Levin, the new president of interactive ventures and games, and Danielle DePalma, executive v.p. of digital marketing, engineered a deal in which the John Wick character was introduced as the first “assassin” in the game, which has more than eight million players.

The distribution team was able to hustle “John Wick” into 347 IMAX theaters, and that proved significant, as they provided a very strong 18 percent of the grosses.

“It really did take everybody pulling together on our team, but what really made the difference is that Keanu is just great in this,” Constantine said.

“Everybody has a short list of favorite movies of his — ‘The Matrix,’ ‘Speed’ or ‘Bill and Ted’s Excellent Adventure’ — and I think this one will be there for a lot of people.”