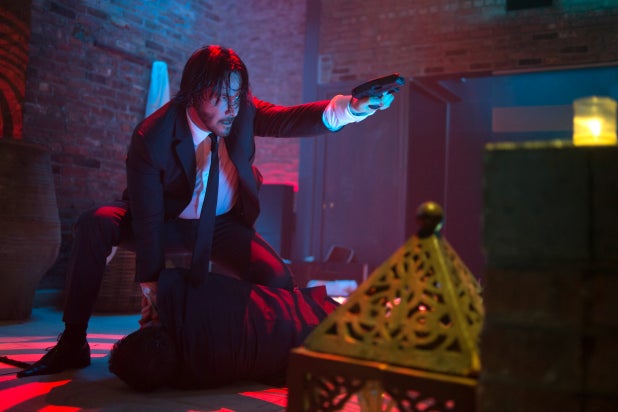 Taking a paper-thin premise and delivering it with cold-rolled steel execution, “John Wick” isn’t perfect, but that’s very much part of its pleasures. Keanu Reeves is the title character, a retired assassin inspired to resume his career after, yes, armed thugs kill his dog, thereby unleashing hell in the form of a fearsomely competent man with nothing to lose.

Directed by stunt veteran (and Reeves collaborator) Chad Stahelski, “John Wick” hearkens back to a past and perhaps forgotten style of American action filmmaking. The shots are long, with the actors clearly doing as much of the fighting as they can and the scenes of hand-to-hand combat and shooting battles constructed in large pieces that resemble choreography rather than in a collage of quick-cut footage. This isn’t champagne filmmaking, but it’s a strong and hearty microbrew with flavor, style, and craft in every drop.

Reeves and Stahelski (who has also served as the actor’s stunt double) obviously know the tone they’re going for. We see John’s marriage to his late wife (Bridget Moynahan) in flashback, and we know it was a happy time because it’s the only set of scenes in the film with brown in them — everything else is either wet-tarmac black, gun-metal blue, or nightclub-neon red.

Of course, before her tragic death from an unnamed medical issue, Mrs. Wick arranged for John to get a puppy so that he might have something, anything, to love. But when greedy gangster’s kid Iosef Tarasov (Alfie Allen, as dislikable here as he is on “Game of Thrones”) takes a liking to Wick’s wicked Mustang that he’s told, is not for sale, thugs beat up Wick, kill the dog, and take the car. Bad call. Iosef is of course the son of local kingpin Viggo (Michael Nyqvist), who turns his resources to keeping his son safe from Wick, but it takes more than hired muscle to stop our hero.

There’s a great line John Wayne has in 1976’s “The Shootist,” where his gunslinger character explains his deadly reputation: “Sometimes it isn’t being fast that counts, or even accurate, but willing. Most men will draw a breath or blink an eye before they shoot. I won’t.” And that’s how Reeves plays Wick in action — no hesitation, no doubt. And Reeves also fights, impressively, with a mix of MMA moves and wrestling-style takedowns and reversals so he can get enough of an upper hand to then shoot his opponent.

A friction-free fantasy of firearms and fistfights more inspired by the best of John Woo than any modern American so-called action film, “John Wick” (featuring a screenplay by Derek Kolstad) also creates a bizarre, stylized version of New York with criminal activity and community in every darkened corner and no square citizens in sight. A hotel, The Continental, functions as a neutral zone for criminals; body-disposal men in argyle sweaters show up when called; a nightclub, cheekily called “Red Circle,” allows various killers and crime lords a safe place to socialize.

As for Reeves, it’s safe to bet that he knows his motivation here isn’t to be taken entirely seriously, but the actor plays it straight as a gentleman killer — someone with a code. The supporting cast — Allen, Nyqvist, Willem Dafoe as another assassin, Adrianne Palicki as the lethal Ms. Perkins, Dean Winters as a minion with a language barrier, and Lance Riddick as The Continental’s cool, courtly desk man — each wring plenty of juice from the pulp of the script and the film’s demi-monde.

There are a few minor off notes in “John Wick,” most notably the screechy, instantly-dated song selections on the soundtrack, but Reeves is more than easy to watch as our anti-hero. He cuts a fine figure in his three-piece suits — four-piece, if you count the bulletproof vest under the tailored one — and eventually, the film plays as armed Faulkner: The past isn’t dead, and it isn’t even past, but you can perhaps shoot it in the face and make it go away.

Stahelski and producer (and, were it not for the DGA, co-director) David Leitch have crafted a satisfying low-budget, high-functioning action film with credit also due to stunt coordinator and second-unit director Darrin Prescott. Both ludicrous and ludicrously entertaining, “John Wick’s” stylish look, B-movie vibe and less-is-more, longer-takes-are-stronger-takes approach to action make it a standout.