The path from cable-TV comedy to the big screen is anything but smooth: For every “Trainwreck,” there are plenty of also-rans, ranging from the middling (“The Kids in the Hall: Brain Candy,” the “Mr. Show” vehicle “Run Ronnie Run”) to the disastrous (“Strangers with Candy”).

The pacing of a comedy sketch, or even a half-hour sitcom, isn’t enough to hold a movie audience’s attention for 90 minutes, so even if the jokes are great, the downtime between them has to engage as well.

Keegan-Michael Key and Jordan Peele, stars of Comedy Central’s “Key & Peele,” haven’t quite licked the downtime problem in their first joint big screen outing, “Keanu,” but when the laughs come, they are hearty and frequent. This crime comedy doesn’t consistently deliver, but the highs make the lows worth enduring.

Much of the humor on “Key & Peele” derives from the two comedians’ performance of masculinity and of a specific kind of blackness; their persona is two nerdy, soft-spoken guys who will, when necessary, puff up their chests and deepen their voice to play-act at he-man brutishness and cold-eyed gangster swagger. The performance itself finds the humor in these stereotypes, and the fact that Key and Peele’s nebbishes inevitably overdo the act makes it all even funnier.

That gag sets up the premise for “Keanu”: The titular adorable kitty runs away from its owner, a drug cartel kingpin who gets shot in the first five minutes, and makes its way to the apartment of Rell (Peele, who co-wrote with Alex Rubens, a vet of the TV show). Rell’s been in the dumps since his last girlfriend ditched him, but the appearance of Keanu has given him a new passion for living.

Rell’s uptight cousin Clarence (Key) is on his own for a few days while wife Hannah (Nia Long) is on a weekend trip with their daughter, and the two have a boy’s night out at a Liam Neeson movie. (Fans of the show know how these two will inevitably pronounce the actor’s name.) When they return home, they discover Rell’s place has been broken into, and Keanu has been stolen. Rell’s dealer Hulka (Will Forte) — speaking of performances of blackness — points them in the direction of Cheddar (Method Man), leader of the “Blips” (a joint venture of the Bloods and the Crips).

Also Read: The Story Behind Key and Peele's 'Keanu': How the Kitten Got Its Name 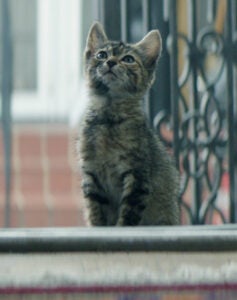 Cheddar, of course, has been entranced by Keanu as well, and Rell and Clarence must pretend to be hard thugs, the ones who killed the cartel guy, to get their cat back. Along the way, they teach Cheddar’s street team, including Hi-C (Tiffany Haddish, “The Carmichael Show”), a few things about teamwork (Clarence is a corporate trainer) and about the power of George Michael’s music.

The two leads completely understand these characters and where to find the gags — Clarence turns on a dime from refusing to say the n-word to not being able to stop saying it — and the grandly violent set pieces are a clever parody of action-movie tropes. But since “Key & Peele” so brilliantly copied the look and feel of so many film genres (and director Peter Atencio is credited with 54 episodes of the show) it’s a surprise that “Keanu” is shot so poorly so often, its exteriors hazy while the interiors are overcluttered. When the film isn’t directly commenting on action movies, it has no look of its own on which to fall back.

And while there are amusing ideas interwoven throughout (Cheddar headquarters at a strip club called Hot Party Vixens, the unfortunate acronym of which is plastered everywhere), the pacing is frequently slack, leading to too many sections of the film where the air gets sucked out of the room while we wait for the next big comedic explosion.

Still, Key and Peele are such gifted performers with such provocative things to say about race and gender that “Keanu” merits a look. Now that they have their “Take the Money and Run” out of their system, they may well have an “Annie Hall” in their future.