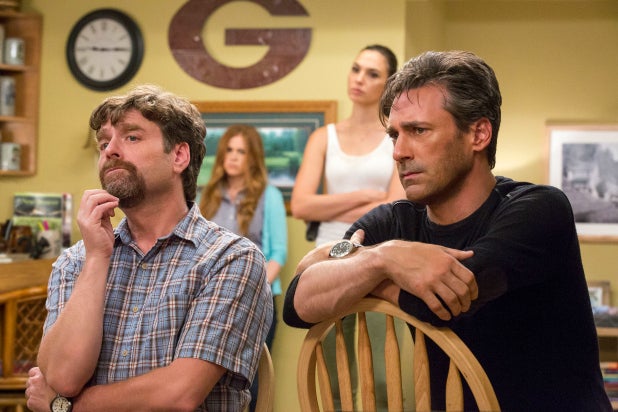 Bad movies often get made with the best of intentions, and promising source material can go south for any number of reasons, but “Keeping Up with the Joneses” is so staggeringly mediocre and bereft of ideas that it seems impossible to believe that Jon Hamm, Zach Galifianakis, Gal Gadot, Isla Fisher and director Greg Mottola (“Adventureland”) went to work every day feeling anything but a gnawing sense of time being wasted.

This black hole of a film is a waste of this talented crew’s time, yes, but it’s also a waste of the audience’s, offering no laughs, no ideas, no fresh perspectives, nothing. Cinematically speaking, this is a large bowl of clear, unflavored gelatin; there may be nothing in it that’s actually harmful, but consuming it is an empty experience that offers no pleasure and no nourishment.

Jeff (Galifianakis) and Karen Gaffney (Fisher) are Atlanta suburbanites in a rut; they’ve just packed the kids off to summer camp, but they haven’t figured out any fun or sexy ways to take advantage of the fact that they’ve got the house to themselves. Enter their new neighbors, the Joneses, an impossibly perfect pair of specimens: Tim (Hamm) is a travel writer with anecdotes of adventures from around the globe, while Natalie (Gadot, “Batman v Superman: Dawn of Justice”) blogs about gourmet cooking while raising money to support Sri Lankan orphans.

Jeff and Karen are immediately dazzled by these newcomers; for all his talk about interpersonal relations as a human resources worker, Jeff doesn’t seem to have a lot of friends, so he’s delighted to bond with Tim. Karen can’t help noticing that Tim seems a little nosy, and she starts doing some snooping herself, leading to the eventual discovery that the cul-de-sac’s new couple is actually a pair of spies with an interest in the aerospace company where Jeff works.

Then come the car chases and the flying bullets and the exploding houses, and the sheer predictability of “Keeping Up with the Joneses” would be forgivable if it went even a little bit past the base expectations of a movie about the suburbs or spies. Or if it were ever, you know, funny. Instead, we get a film that thinks the word “urinal” is so hilarious that they trot it out every ten minutes, as well as a cloak-and-dagger plot so utterly by the numbers that viewers can follow it in their sleep, much like screenwriter Michael LeSieur (“You, Me and Dupree”) apparently did.

As an Atlanta native myself, I do enjoy any movie that finds an interesting use for the downtown skyline’s famous blue Polaris dome, but everything else in this tired farce looks and feels utterly generic, shot in bright sitcom lighting by Andrew Dunn (“Bridget Jones’s Baby”). The score by Jake Monaco (“Absolutely Fabulous: The Movie”) hits the basic spy-comedy notes, but it’s one of film’s few energetic ingredients.

The talented quartet of lead actors, for their part, demonstrate enough energy that you can’t accuse them of phoning it in, but not so much that they’re taking any extraordinary measures to revive this corpse. Even Galifianakis never turns his knob past 6 or so, which winds up being a smart move; him at 10, working with material this flaccid, would have been fairly unwatchable, and to call “Keeping Up with Joneses” unwatchable gives it too much credit. You can’t even be mad at something this disposable and negligible, just irritated.