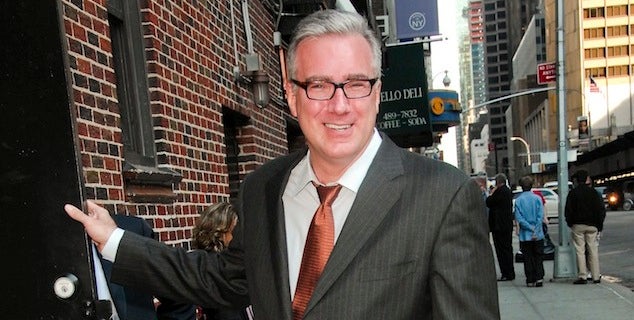 Keith Olbermann has burned a lot of bridges, but seems eager to build one back to ESPN.

The anchor, who is suing his most recent employer, Current TV, has made several overtures to the sports network he left in 1997, the New York Times reports. His efforts included a recent dinner with ESPN president John Skipper.

Skipper told the newspaper he had dinner with the former "Sportscenter" cohost because he believed Olbermann would be "provocative and witty and fun to have dinner with." He added that Olbermann "was indeed lots of fun."

"Clearly he was looking to see if there was an entry point to come back," Skipper said.

But he did not come away ready to rehire the notoriously difficult Olbermann, who left MSNBC on bad terms before he joined Current.

“After the dinner, at that point, there was no real appropriate place for Keith to come back, nor did I feel like I was prepared to bring him back,” Skipper told the Times. He explained that it is difficult to rehire talent at ESPN, because "when somebody leaves, somebody else fills their place.”

Olbermann's charm offensive apparently includes his comment to the Times, in which he lavished Skipper with praise: "I had the privilege to spend some time with John Skipper," he said. "His vision and charm were readily apparent, and judging by his leadership, his family name was prophetic."

In the months since the dinner, Olbermann’s representatives have continued looking for possible opportunities for Olbermann at ESPN, the Times reported, citing a senior executive at the network and someone directly involved with Olbermann’s efforts.

If ESPN does give him a shot, Olbermann will be ready: He spent much of the weekend tweeting images from Major League Baseball's spring training.

And he is working with the network in one sense: He appears in the new ESPN short, "Holy Grail: The T206 Honus Wagner," in which he talks about his love of collecting baseball cards and the significance of the Wagner card.