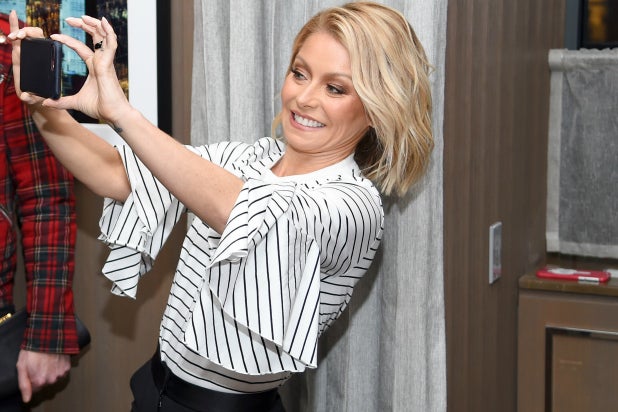 Kelly Ripa attends the "Two Turns From Zero" Book Launch Event at The Regency Bar and Grill on March 8, 2017 in New York City.

That means it’s almost time for final exams, so we’ve got a history lesson for readers: Ripa’s original partner, “Live” co-founder Regis Philbin, left their syndicated talker on Nov. 18, 2011. Michael Strahan snagged his seat on Sept. 4, 2012, which was the first episode of a new Fall TV season. All told, that means the last search for a new Ripa co-host took executive producer Michael Gelman and Disney-ABC about nine-and-a-half months and 59 human options to nail a man down and debut.

Since Strahan bailed on the program on May 13, 2016, we’re officially past 10 months now — and by TheWrap’s count, we’re currently at 66 different guest co-hosts. In other words, get on it, guys.

Also Read: Kelly Ripa's 8 Co-Host Frontrunners Based on Number of Guest Spots, From Her Husband to Scott Wolf (Photos)

Why the big(ger) delay? Well, some have theorized that Ripa prefers being on her own these days, though she’s publicly stated otherwise. So make a pick, already.

Or could it be possible that the job isn’t such a hot commodity after all, given how ugly it got when Strahan elected to go to “GMA”? According to Philbin, she wasn’t exactly a joy to be around when he left her either — so scratch any sort of nostalgia play with the 85-year-old.

In a perfect world, if she had her druthers, Andy Cohen or Anderson Cooper would probably permanently be by Ripa’s side. Unfortunately, those guys are a little busy at the moment. Cooper had to turn the banter-fest down last time to remain at CNN, and Cohen has effectively taken himself out of the running due to his responsibilities at Bravo.

Over the summer, it seemed like the then most-frequent guest co-host Fred Savage was the frontrunner — especially when his Fox sitcom “The Grinder” got canceled. And after TheWrap pointed out his number of “Live” appearances versus others, Las Vegas took notice, handing him the best prop bet odds for the permanent gig.

We hope you didn’t actually push your chips all-in on the “Wonder Years” alum, though, as he has booked up quite a bit since. And we hear that there haven’t been any discussions with Fred for a while.

Nowadays, Ripa’s most-regular guest co-host has been friend Jerry O’Connell, with 18 shows under his belt. Next is Christian Slater (13 appearances, plus two more booked), who has “Mr. Robot” to worry about.

Mark Consuelos would probably be a pretty good choice — and not just because he’s married to Ripa. Consuelos’ average TV Rating across nine “Live” fill-in appearances since Strahan left is solid, and his 10th episode was just announced. That said, he was a finalist the last time we did this dance, when Ripa stated they can’t “stay married and both do that show.”

Let’s ignore for a moment that they met at work on “All My Children.”

Other faces on “Live” include Carrie Ann Inaba (six eps, and seems interested in the role), Scott Wolf and Chris Hardwick. Flip a few coins, because who knows what’s going through Ripa’s mind.

Initially, the revolving door of 2016 guest co-hosts provided “Live” with a nice TV ratings boost, though the Nielsen numbers have since settled down. With the February sweeps in our rear-view, maybe it’s the May one to circle on your calendar. We’re also talking to you, Kelly. Seriously, highlight a day and make it happen.

For now, readers should look to O’Connell and Consuelos as the likeliest candidates — add Slater to the shortlist if he gets the a revised and favorable filming schedule from USA Network.

Ironically for the talk show, no one is talking about this (except us): Disney-ABC declined comment on this story, and TheWrap did not hear back from the personal reps for O’Connell, Slater and Consuelos, among other options with good odds.

Kelly Ripa's 8 Co-Host Frontrunners Based on Number of Guest Spots, From Her Husband to Scott Wolf (Photos)

Kelly Ripa has tried out 66 different "Live" guest co-hosts since Michael Strahan bailed on the program -- here are the eight who have been asked back the most.