Ken Jeong has football on the brain in a clip for the upcoming premiere of “The Masked Singer” Season 7. In the clip, shared exclusively with TheWrap, the comedian must guess the identity of the performer known simply as The Ram.

The Ram’s costume is a set of black and gold armor, with a helmet that resembles the head of the male sheep. Atop the helmet is a red feather headdress.

In the end, he determines that all signs point to Los Angeles Rams quarterback Matthew Stafford, who is fresh off a Super Bowl win. 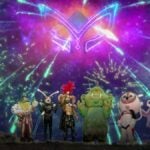 Of course, the actual identity of The Ram has yet to be revealed. The contestant is just one of the celebrities competing on Season 7 of the reality competition series, dubbed “The Good, The Bad, and the Cuddly.”

Based on a preview for the season, it appears that the first group of contestants will also feature what appears to be a frog prince, a firefly-esque creature, a one-eyed monster, a lemur, and a woodland creature bound for space.

Jeong is joined at the judges’ table for Season 7 by Jenny McCarthy Wahlberg, Nicole Scherzinger and Robin Thicke. Nick Cannon serves as the host.