The crowd cheered and clapped at 10 in the morning on Monday for a feel-good film from one of the most earnest and unflinching directors on the block, Ken Loach.

The cerebral, diminutive Loach often makes his films in the world of the British working class. He likes to focus on the forgotten man, the broken spirit, the individual lost in the harsh demands of modern society, from “Raining Stones,” to “My Name is Joe,” to “The Wind That Shakes the Barley,” about two brothers in Ireland.

But “Looking for Eric” is full of laughs and bittersweet humor. (And this, after “Brokeback” director Ang Lee let down his hair with “Taking Woodstock.” What’s going on here?) 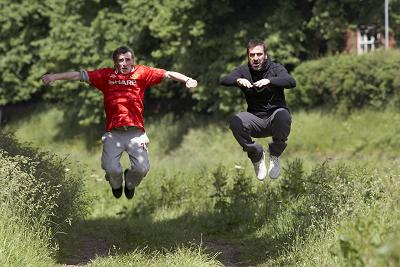 It is the flip side of Loach’s examination of the human condition at its most downtrodden. Eric (Steve Evets) is a postman deep in the throes of midlife breakdown. And he turns to his hero, soccer star Eric Cantona, to guide him through a thicket of personal crisis.

Cantona plays himself in the film as the other Eric’s alter ego, who counsels the postman about reconnecting with a wife he abandoned three decades previously, two stepsons in trouble with the law and his apparent panic attacks.

The film has touching moments of warmth and charm, such as when Eric’s mates from the post office sit around in a self-run group therapy session and try to imagine being seen through the eyes of someone great. (Eric picks Cantona, of course. Another picks Sammy Davis Jr. Who can only see them through one eye, of course.)

And Cantona does a fine job of puncturing his own peacock stereotype as a star for Manchester United in the 1990s. “I am not a man,” he tells Eric the postman at one point. “I am Cantona.”

At the press conference after the screening, the now-retired soccer star said, “I have great pleasure shooting films. Whether I’m a good actor or not is for others to judg …. Ken is always finding new methods for his actors, and he’s very humble as well. He got me to give every bit of myself.”

Loach said the film taught a lesson about teamwork. “For 30 years society has been telling us we’re individuals, we must succeed alone, when in fact we need one another to succeed,” he said. “The best things we do, we do as a team, as a collective.

The film does not have U.S. distribution, but after today’s reception – it might.

Israeli films are enjoying a renaissance not seen since – well, perhaps ever.

There are two Israeli films in the out of competition selection at the festival this year, including Haim Tabakman’s “Eyes Wide Open,” a gay love story set in the heart of the ultra-orthodox community; and “Jaffa,” which screened over the weekend to an enthusiastic reception, a love story between an Israeli woman, Mali, and a Palestinian man, Toufik, in the bicultural city on the sea. (Director Karen Yedaya pictured below) 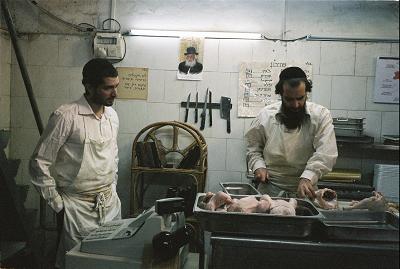 Other acclaimed Israeli films, like last year’s “Waltz With Bashir,” “The Band’s Visit” or “Late Marriage,” have all been made possible by a 2001 Israeli law that has revolutionized the Israeli film industry by providing seed funding for productions from a state-funded nonprofit committee.

“Until January 2001 we were just floating. Israeli cinema was always the bad stepchild in our culture,” said Katriel Schory, the executive director of the Israel Film Fund, which provides the seed funding. “With a small investment, filmmakers can go out and find the rest of the money from private sources. Without this, without public money, there is no cinema.”

The fund has a comparatively miniscule budget: $6 million. But it’s enough to have fundamentally changed the landscape for filmmakers. The fund provides up to $500,000 per project, and grants a piece of equity in every project to the filmmaker. 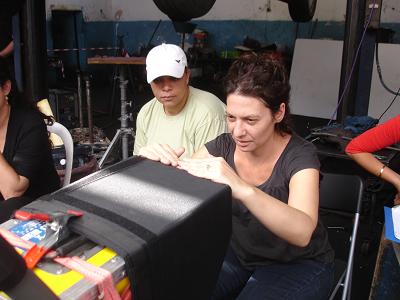 The results have been remarkable.

In 1998, Israel ’s lowest point for box office share, only .3 percent of movie tickets sold were for Israeli films.

Since 2004, three years after the start of the fund — which included a marketing budget to encourage Israelis to go see Israeli films — that statistic rose to 14 percent of the annual tickets sold. It is now higher than that, something like 1.9 million out of 10 million tickets sold annually.

The fund’s slogan? “Give us another chance.”