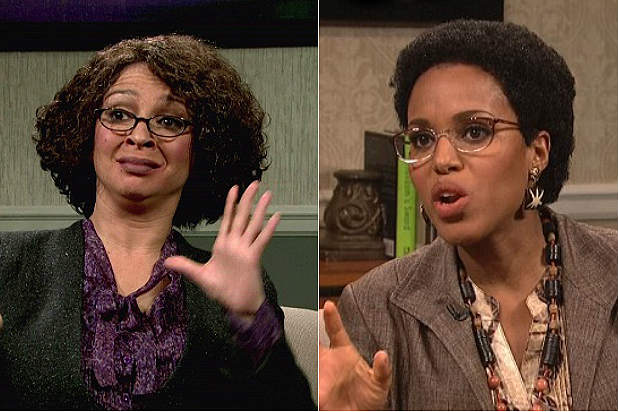 Amid the growing debate over diversity on “Saturday Night Live,” TheWrap unearthed footage illustrating that not only are African-American women a scarcity on the show but when they do appear, writers apparently have two token sketches. Make that three if you count Oprah Winfrey.

For instance, Kerry Washington appeared in the “How’s He Doing?” sketch Saturday, which parodied black voters’ unyielding support for President Barack Obama. Former cast member Maya Rudolph did the same when she hosted in February 2012.

The only difference is Rudolph played a professor from the historically black college Howard University and Washington’s character was from Spellman College — another historically black college. Making matters worse, both Rudolph and Washington played FLOTUS Michelle Obama. Washington also doubled as Winfrey while Rudolph lampooned her countless times as a cast member. Apparently, when it comes to black women in pop culture, the writers behind “Saturday Night Live” are rather limited in their references.

While Washington joked about the late-night series’ lack of black women cast members in the opening sketch, it is telling that the two black women who’ve hosted the show most recently were pigeonholed.

What did you think? Is it offensive that “SNL” went to the same comedic well or is it just the nature of sketch comedy?