`The depiction of religious communities tends to be a tricky proposition for filmmakers, particularly because a medium often associated with the secular world can miss many of the nuances on the other side. "Holy Rollers," the directorial debut of Kevin Asch, incredibly manages to avoid that pratfall with a remarkably accurate depiction of Brooklyn’s insular Hasidic enclave. 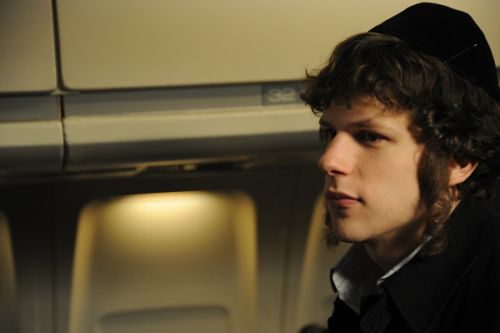 The movie, which premiered at the Eccles Theater Monday and received a standing ovation prior to the Q&A, stars Jesse Eisenberg as an alienated young man whose frustrations over the demands of ultra-orthodox parents leads to his involvement in underground drug smuggling.

Eisenberg, whose uncanny ability to remain involved with smart, bittersweet coming-of-age dramas has yet to fail him, conveys a credible transition from sheltered dork to angry rebel.

The details of his world make "A Serious Man" look like parody: In the opening scenes, Asch explores the streets where Eisenberg’s character lives, picking up fragments of Yiddish and subtle rituals that only someone familiar with such things (as I am to a certain degree, due to the lifestyle choices of some close family members) would recognize as genuine. There’s a near-ethnographic quality to these moments that lures us in, which makes the protagonist’s plight all the more believable.

During the Q&A, Asch discussed the research involved in creating the environment, and it’s a wonder they didn’t make a documentary on the side. New Yorkers know about the "Mitzvah Tanks" that Hasidim frequently drive through bustling urban neighborhoods during outreach missions; Asch, Eisenberg and others apparently accompanied the drivers on ridealongs, as if they were researching a cop movie. (Curly sidelocks replace guns in this case.)

The story at the center of the movie grows increasingly gritty and downbeat as Eisenberg’s character drifts away from religious Judaism and begins engaging with his newfound freedom. However, just when the drama seems to have reached its apex, Asch backs away and leaves us with an annoying series of title cards and edits explaining away the ending. After so much build-up, the finale feels emotionally dry.

I spotted Harvey Weinstein paying close attention during the Q&A and immediately thought: Here’s one movie that could really use Harvey Scissorhands in its final moments. With a better ending, "Rollers" would be holy, indeed.

Here’s Jesse Eisenberg talking about his approach to the performance during the Q&A: