Legendary has closed a deal with Kevin Bacon to play the villain in “The Toxic Avenger” opposite Peter Dinklage, Jacob Tremblay and Taylour Paige, according to an individual with knowledge of the project.

Macon Blair will write and direct the adaptation of the cult-classic franchise that centers around the iconic superhero “Toxie.” Production is set to get underway in Bulgaria later this month.

“The Toxic Avenger” follows the monstrous protector of Tromaville, N.J., born when the mild-mannered Melvin falls into a vat of toxic waste. He’s transformed into a repulsive yet lovable mutant hero who stands up to bullies and corruption with irreverent zeal — doing good and brutally mauling evil in a no-holds-barred fashion. 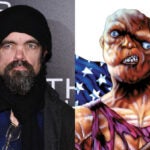 Lloyd Kaufman and Michael Herz of Troma Entertainment will serve as producers. Alex Garcia and Jay Ashenfelter will oversee for Legendary.

An Emmy Award nominee and SAG Award winner, Bacon currently stars in the critically acclaimed Boston crime drama series “City on a Hill” for Showtime, just announced for its third season, and in the upcoming film “One Way.” More recently, Bacon starred in “You Should Have Left,” which was released last summer and reunited him with David Koepp. He also appeared in Scott Cooper’s “Black Mass” opposite Johnny Depp and starred in the indie thriller “Cop Car” from Jon Watts, which premiered at the 2015 Sundance Film Festival. Bacon also co-starred in “Patriots Day” alongside Mark Wahlberg, John Goodman and J.K. Simmons.

Bacon is repped by MGMT, attorney Fred Gaines and Viewpoint.