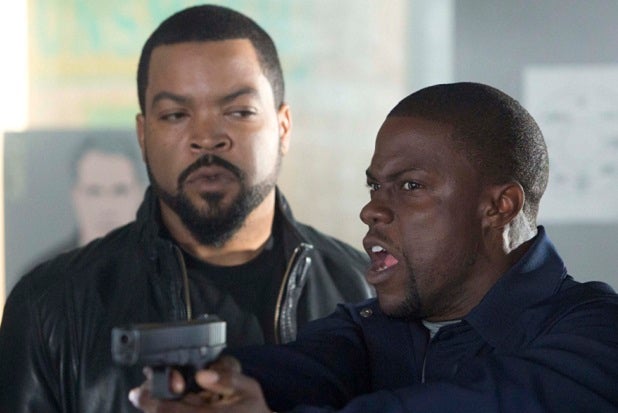 “Ride Along 2,” the buddy cop comedy starring Kevin Hart and Ice Cube, has knocked “Star Wars: The Force Awakens” out of the No. 1 spot at the box office, and is heading for a $39.5 million triumph on Martin Luther King Day weekend.

After four weeks in the top spot, Disney’s blockbuster fell to third with an estimated $31 million. That put it behind Leonardo DiCaprio‘s “The Revenant,” which is heading for $35 million over the four days fueled by the 12 Oscar nominations it received on Thursday. Michael Bay‘s politically-charged drama war thriller “13 Hours: The Secret Soldiers of Benghazi” will finish fourth in its debut over the long weekend with an estimated $17 million for Paramount that was driven by Red State moviegoers.

“The Force Awakens” became the first movie to top $850 million at the domestic box office and also crossed $1 billion overseas this weekend to give the space epic a $1.86 billion global haul. In the process, it passed “Jurassic World” and moved into the No. 3 spot on the all-time list, behind only “Avatar” and “Titanic.”

Also Read: Why the MLK Holiday Has Become a Major Box Office Weekend

“Norm of the North,” a low-budget animated family film distributed by Lionsgate, debuted in fifth with $8.5 million, behind “Daddy’s Home,” which is heading for a $10.7 million fourth weekend.

The overall holiday weekend is running roughly 20 percent behind last year, when “American Sniper” exploded for $107 million after dominating the Oscar nominations.

Universal’s “Ride Along 2” will come in well under the opening of the original film, which brought in $41.5 million over the three days and $48.6 million over four two years ago. The sequel received a “B+” CinemaScore.

Also Read: 'Ride Along 2' Is 'As Funny as Lead Poisoning,' And 8 Other Ruthless Reviews

The crowd, 52 percent female, and 55 percent under 25, was dominated by ethnic moviegoers, with both African Americans and Hispanics accounting for 34 percent of the audience.

“13 Hours,” based on the story of the six members of a security team who fought to defend the American diplomatic compound in Benghazi, Libya, after a 2012 terrorist attack. The film has been a hot topic during the 2016 presidential race, because the attack occurred under the watch of then-Secretary of State Hillary Clinton.

It drew roughly 33 percent of its grosses from Florida, Texas and surrounding states. Clinton was asked if she saw the movie on CNN’s “State of the Union” on Sunday (she hasn’t) and GOP candidate Donald Trump bought out an Iowa theater for a screening. But Megan Colligan, Paramount’s head of distribution and marketing, told TheWrap that the film was about heroism, not politics.

“The movie is an apolitical and inspiring story of six guys on the ground there during the attack who went on to save 36 lives, enduring 13 hours of absolute hell, never knowing when an end was in sight,” she said.

The very strong Red State numbers suggest it’s being seen, at least to a degree, as an indictment of Clinton and that makes it a challenging film to market in Blue States, such as California and New York. The good news was the “A” CinemaScore it received from first-weekend audiences, which were mainly over the age of 25 (79 percent) and male (55 percent).

“The Big Short,” cashed in on its Best Picture Oscar nomination and did it the hard way. Paramount pulled back and dropped 764 theaters rather than add locations, and the dark comedy about the U.S. recession will take in roughly $5 million from 1,509 theaters over the four days. That’s just a 20 percent drop despite the fewer theaters, and its eighth-place finish gave Paramount three films in the top ten.