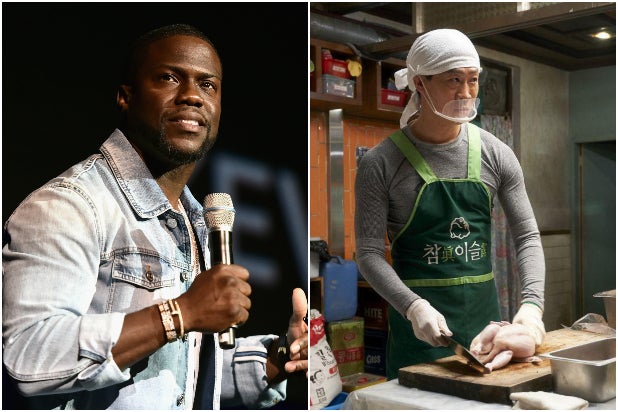 Kevin Hart is producing with an eye to star in the comedy “Extreme Job,” an English-language remake of a Korean box office smash, and Universal Pictures has acquired the worldwide rights to the film.

Last March, “Extreme Job” became the highest grossing film of all time in South Korea, taking in $127 million in what was 14 times greater than the film’s budget. CJ Entertainment, the Korean entertainment conglomerate that made the original comedy, is developing and producing the English-language remake along with Hart’s HartBeat production banner.

Tracy Oliver (“Girls Trip,” “Little”) is on board to adapt the screenplay about a team of narcotics detectives who go undercover in a fried chicken joint to stake out an organized crime gang. But things take an unexpected turn when the detectives’ chicken recipe suddenly transforms the rundown restaurant into the hottest eatery in town.

“Extreme Job” will be the second collaboration between Hart, CJ and Universal on an English-language remake of a Korean film. Hart and CJ are currently developing the female-driven dramedy, “Bye, Bye, Bye” at Universal. Amy Aniobi is writing the script centered on a group of adult friends who reunite 20 years after high school, based on the 2011 Korean film “Sunny.”

“Once ‘Extreme Job’ became such a phenomenon in Korea, we knew we had to partner up with powerhouses for the U.S. version,” Chung said in a statement. “With Universal, Kevin Hart and Tracy Oliver on board, we know this project is in the savvy hands of hit-makers who turn films into cultural events.”

“At Hartbeat, we are always seeking fun projects that tell a story for worldwide audiences, and we could not be more excited to be a part of this one,” Hart said in a statement. “Tracy Oliver is such an incredible writer who will surely bring this story to life. We are so thrilled to be working with Universal and CJ Entertainment, who’s still helping me achieve my goal of becoming a K-Pop star.”

“The concept of this film is so unique and Universal Pictures is the perfect home to help bring it to a global audience,” Oliver said in a statement.  “I look forward to collaborating once again with their teams.”

Also Read: Steve Burke Compares Current State of Streaming to 'Cable in the 1970s or 1980s'