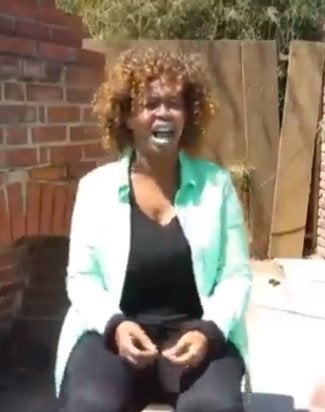 The ALS Ice Bucket Challenge is raising a lot of money and a lot of awareness for the fight against amyotrophic lateral sclerosis, or Lou Gehrig’s Disease.

Celebrities and public figures from all walks of life have stepped up to take the challenge by donating to The ALS Association, dumping a bucket of ice water on their head, or both. But that doesn’t mean it always goes smoothly.

Thanks to a push from Kevin Hart‘s Facebook page, one epic #IceBucketChallengeGoneWrong video has gone viral solely because it is such a disaster.

The woman in the video doesn’t even get the chance to nominate anyone else for the challenge before she’s blasted with a bucket of water, which immediately sends her wig flying. At this point, the video has our attention. Why was the water thrown into her face rather than dumped on her head?

But it was the second bucket that put the video over the edge, and us.

See video: Jimmy Kimmel Next-Levels the Ice Bucket Challenge With a Slushie in His Pants

The woman clearly hadn’t recovered from the first when the second blast hit her again right in the face. She holds her hands up, making incomprehensible noises and gestures, as if to ward off a third blast. From this point, she was beyond words, beyond reason, beyond comprehension.

And the video was beyond hilarious, beyond breathing, beyond transcendent.

The ALS Ice Bucket Challenge has been won. This shall not be topped. See it below and bask in its glory.