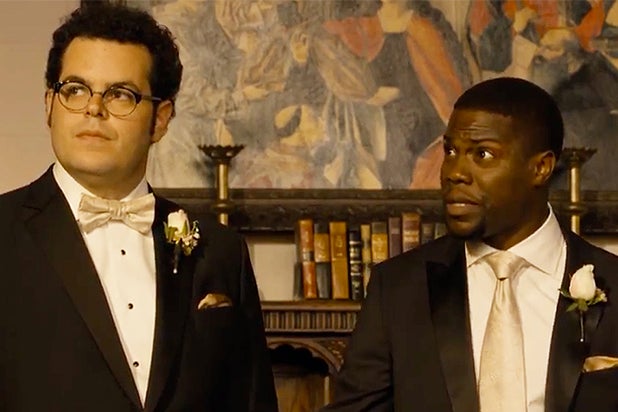 Kevin Hart‘s upcoming comedy “The Wedding Ringer” is the latest casualty of the Sony hacking scandal.

The press junket for the film was set to take place this weekend in Los Angeles but Sony’s Screen Gems decided to pull the plug at the last minute.

A broadcast journalist who was slated to attend the junket​ told TheWrap he learned about the cancellation just one day in advance. “We all got emails,” he said. “We were told that the junket would be in January at some time. No date was given.”

Meanwhile, the New York Daily News reported that it was scheduled to interview Hart Sunday but was told by Sony reps that the studio was pushing the junket because it wanted to “focus on the movie,” not the email hacking scandal.

The three executives complained about an upcoming movie, specifically that the comedian’s team requested more money to utilize his 14.4 million Twitter followers and other social platforms to promote the film.

While Hart’s team said he would happily do the normal publicity rounds like junkets and photo calls, the emails hinted that he wanted additional compensation to pitch the movie on social media.

Hart responded to the leaked emails on Thursday with a message on his Instagram page.

“Knowing your self worth is extremely important people….I worked very hard to get where I am today. I look at myself as a brand and because of that I will never allow myself to be taking advantage of. I OWN MY BRAND…I MAKE SMART DECISIONS FOR MY BRAND…I PROTECT MY BRAND….which is why I’m able to brush ignorance off of my shoulder and continue to move forward. I refuse to be broken people….with that being said its now time for me to get back to building this empire that I’ve always dreamed of,” Kevin posted on Instagram on December 11 with the hashtags “#KnowYourselfWorth #HustleHart #MogulMindset.”

“The Wedding Ringer,” which co-stars Josh Gad and Kaley Cuoco-Sweeting, is set to open on January 16. Despite the press junket being canceled, Hart took to Twitter Sunday to assure fans that the promotional campaign is shifting into high gear.

Me & @joshgad are about to be everywhere people….we are about to promote the shit out of this film….We are going INTERNATIONAL BABY

A Sony rep has not yet responded to TheWrap’s request for comment about the status of the press junket.