In the latest David and Goliath battle to be waged thanks to the viral power of Twitter, filmmaker Kevin Smith delivered a livid series of tweets on Saturday night, saying he was thrown off a Southwest Airlines flight because of his weight. 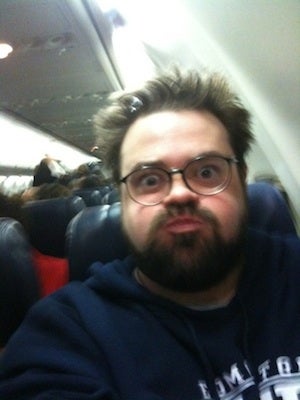 Some of his tweets below — these were only the beginning of a still-going tirade, including a photo he posted (left, which he captioned "Look how fat I am on your plane! Quick! Throw me off!").
• Dear @SouthwestAir – I know I’m fat, but was Captain Leysath really justified in throwing me off a flight for which I was already seated? about 3 hours ago from Echofon
• Dear @SouthwestAir, I flew out in one seat, but right after issuing me a standby ticket, Oakland Southwest attendant Suzanne (wouldn’t give
• last name) told me Captain Leysath deemed me a "safety risk". Again: I’m way fat… But I’m not THERE just yet. But if I am, why wait til my
• bag is up, and I’m seated WITH ARM RESTS DOWN. In front of a packed plane with a bunch of folks who’d already I.d.ed me as "Silent Bob."
• So, @SouthwestAir, go f*** yourself. I broke no regulation, offered no "safety risk" (what, was I gonna roll on a fellow passenger?). I was
• wrongly ejected from the flight (even Suzanne eventually agreed). And f*** your apologetic $100 voucher, @SouthwestAir. Thank God I don’t
• embarrass easily (bless you, JERSEY GIRL training). But I don’t sulk off either: so everyday, some new fuck-you Tweets for @SouthwestAir.

@ThatKevinSmith hey Kevin! I’m so sorry for your experience tonight! Hopefully we can make things right, please follow so we may DM!

By the way, @southwestair has plenty of Twitter power of its own: 1 million followers.

A tiny sampling of the anti-Southwest tweeting that went on late into Saturday night: