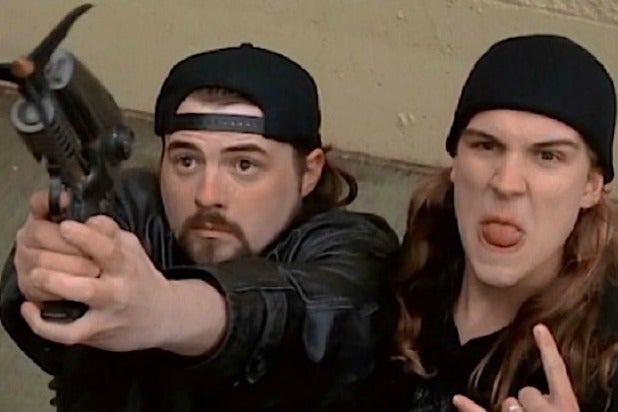 Filmmaker Kevin Smith has found the positive side of being stuck in quarantine — it gave him the opportunity to sit down at his computer and crank out the first draft of “Twilight of the Mallrats!” the sequel to the cult hit “Mallrats,” which came out in 1995.

“25 years after the original, Brodie Bruce will be back for an unnecessary sequel set against the Mallpocalypse!” Smith wrote on Instagram, giving fans insight into what the memorable characters are doing these days.

“Rene, Willam, Gwen, Brandy, T.S., Trish, Mr. Svenning, LaFours and the rebooted @jayandsilentbob are the returning ‘Rats in an Askewniverse imagining about what happens when the sidewalk sales end, and ‘happily ever after’ is easier to say than live! The #jayandsilentbob stuff is some of my favorite conceptual comedy I’ve ever written but the whole script is silly, sentimental and sweet.”

Just the way we liked the original. The romantic buddy comedy Smith wrote and directed starred Jason Lee, Shannon Doherty, Jeremy London and Ben Affleck, among others, and centered on a couple of New Jersey clackers who seek refuge in the local mall after their girlfriends dump them. Although it didn’t do well when it was in theaters, it developed a cult following many years later when it was released on video.

Smith sounds excited about the followup, writing that “at 98 pages, the story moves like a brakeless bullet train!”

He added that although it will be months before they can actually shoot it – and there we have the downside to that quarantine —  he recorded an entire episode about “Twilight of the Mallrats” for his new podcast, “Silent Bob Speaks,” available at That Kevin Smith Club.

“And now that *this* script is done, it’s on to a new draft of #moosejaws and then the first draft of the new version of #clerks3!”