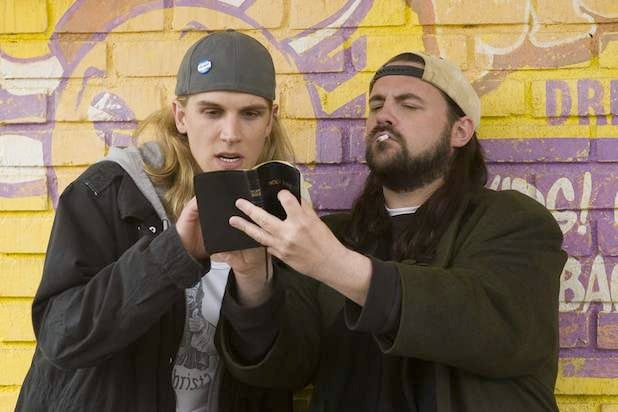 Kevin Smith has been talking about making “Clerks III” for years, but it sounds like his script may finally become a sequel, thanks to the box office bomb “Tusk.”

“‘Tusk’ was the absolute bridge to ‘Clerks III,'” Smith said during Friday’s “Hollywood Babble-On,” his weekly live podcast. “Because of ‘Tusk’ I got my financing for ‘Clerks III.'”

“Tusk” stars Justin Long (“Accepted”) as a podcaster who ventures to a secluded location in Canada by himself to interview a seafarer, played by Michael Parks (“Red State”), who is obsessed with walruses, and wants to turn Long’s character into one.

After 10 days in theaters, “Tusk” has only managed to make $1.4 million, and has received mostly negative reviews. It must, however, have at least one very wealthy fan, because he’s managed to fund a movie that The Weinstein Company — which produced “Clerks II” and owns the rights to the franchise — refused to finance for $6 million, but agreed to distribute.

“A year and change ago I was desperately trying to get ‘Clerks III’ made for the 20th anniversary and that desperation — I must have reeked of it because I couldn’t f–king find money and shit,” Smith said during the podcast at the Hollywood Improv. “But it was ‘Tusk,’ people going ‘Holy f–k, what else do you have?’ and I was like ‘Clerks III’ and they’re like ‘done’. So, everybody that’s like, ‘He failed, he failed,’ I’m like ‘Thank you, I failed into doing ‘Clerks III.'”

Smith announced plans for a third and final outing for New Jersey convenience store clerks Randal (Jeff Anderson) and Dante (Brian O’Halloran) in March of 2013. He later said it would be his “last cinematic effort as a writer/director,” but then later become enthralled with “Tusk,” and has since announced a religious rapture comedy, “Helena Handbag,” as well as a Christmas-themed horror movie and a “Tusk” spinoff starring his daughter, Harley Quinn Smith.

Also read: Kevin Smith on Kickstarter: I’d Rather Take a Second Mortgage Out

Smith said late last year that he expects to start production on “Clerks III” in May. Currently, he’s begging his 2.66 million Twitter followers to give “Tusk” a chance in theaters, where it is “gasping for air.”

SEE THE FLICK that nobody saw last weekend! @tuskthemovie is still gasping for air at a theater near you! #WalrusYes pic.twitter.com/B6UwZzGh3P