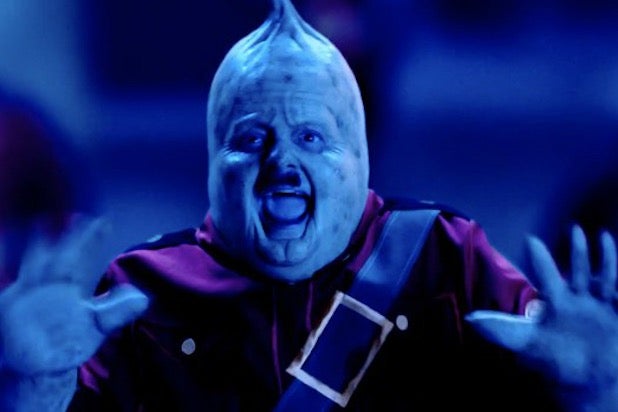 Kevin Smith‘s “Yoga Hosers” takes aim at critics who have regularly ripped his movies throughout his career, but they’re blasting right back in the mostly awful reviews of his latest comedy.

“Yoga Hosers,” the second in Smith’s “True North” trilogy after “Tusk” landed with a thud in theaters in 2014, stars his own daughter, Harley Quinn Smith, and Johnny Depp‘s daughter, Lily Rose Depp, as Canadian convenient store clerks who must battle an army of mutant bratwurst Nazis. Or something like that.

According to the reviews, the charismatic young stars are the highlight of the movie, which is otherwise dismissed for not being particularly funny, relying on bad CGI, and having a messy plot. The movie hits limited theaters on Friday, and currently has a 26 percent approval rating from 31 mostly disappointed critics counted on Rotten Tomatoes. The consensus the critic aggregator offers is as cruel as the reviews it’s summarizing: “Undisciplined, unfunny, and bereft of evident purpose, Yoga Hosers represents a particularly grating low point in Kevin Smith‘s once-promising career.”

Here are seven more terrible reviews to consider before buying a ticket.

A.V. Club critic A.A. Dowd:
“‘Yoga Hosers’ isn’t really a movie. It’s a quarter-to-1:00 a.m. ‘SNL’ sketch, nightmarishly distended into oblivion. It’s a corny Canuck joke, told for 88 surreally unfunny minutes. It has a target demographic of one: He wears hockey jerseys and, again, loves his daughter. ‘I don’t give a shit about the audience anymore,’ Smith announced at this year’s Sundance Film Festival, by way of introducing the thing. Maybe it’s dirty pool to bludgeon an artist with his own self-deprecation, or just foolish to believe that a filmmaker who’s lived and died on feedback could lose interest in it. (This is a guy, remember, who routinely apologizes for his own movies and rehashes old successes.) ‘Yoga Hosers,’ however, makes it easy to take Smith at his word. No one who gives any shits about their audience would subject them to something so insultingly slapdash.”

Also Read: Kevin Smith Gives His Daughter's Cyberbully Earnest Advice - and Every Cyberbully Should Read It

Newark Star-Ledger critic Stephen Whitty
“Set, like his last bad film, ‘Tusk,’ in Canada – and bringing back some of the same characters, and many of the same actors – it’s an ugly, awkward, self-indulgent and incredibly unfunny mess of a movie, made up out of half-forgotten ‘DeGrassi High’ memories and feeble tributes to ’80s horror flicks. The idea, such as it is, is that “the two Colleens” – perpetually bored 15-year-olds who work at a Winnipeg convenience store – want to go to a senior’s party. Except they have to work. Also, there are these Satanists who want to carve them up. Oh, and a small army of tiny, recently revived Nazi soldiers – made out of bratwurst, sauerkraut and a mad scientist’s DNA — out to exterminate the world’s critics. And sitting there, watching this, I thought: Please, hurry.”

Village Voice critic Pete Vonder Haar:
“‘Yoga Hosers’ isn’t a movie: It’s a podcast riff given material form; a bong rip visualized; an ‘SCTV’ sketch devoid of laughs. It struggles to fill an hour and a half, with most of the cast serving little purpose beyond padding things out a few more minutes… ‘Yoga Hosers’ is lazy, unfunny, and self-indulgent. It should have been binned the second the (literal) smoke cleared, and while it’s been clear for some time that Smith is either incapable of making a good movie or simply doesn’t care to, ‘Yoga Hosers’ may very well be the film that finally convinces audiences the emperor has no hockey jersey.”

Collider critic Adam Chitwood:
“Look, if you want to make home movies with your friends and family that’s fine. But if you’re going to release them as feature films, at least respect viewers enough to try to make something that makes sense. Smith’s trajectory from the smart and heartfelt ‘Clerks’ and ‘Chasing Amy’ to the truly atrocious ‘Yoga Hosers’ is both fascinating and disappointing. I know there’s a better writer, even a better filmmaker in there somewhere. Tusk felt like a genuine attempt at trying to make a good movie, and even though the result was a mixed bag, at least Smith put himself out there. But ‘Yoga Hosers’ is a retreat into, “If you don’t like it, I just won’t even try” territory, resulting in an intentionally critic-proof movie that exists only to amuse a handful of people. It’s a very, very, very bad movie, but I’m not even mad that it’s awful. I’m frustrated that Smith didn’t even try.”

Film School Rejects critic Rob Hunter:
“Some of you may not believe this, but most film critics would prefer not to write negative reviews. We’re film fans first and foremost, and that means we’d love nothing more than for every movie we see to be good or, better yet, great. It’s true that critical slams are often easier to write, but I don’t ever walk into a screening hoping the film sucks for any reason – let alone to make my job a little bit easier… ‘Yoga Hosers’ is an actively terrible, no longer gives a damn, he’s-forgotten-how-to-wipe-his-ass-and-is-just-flinging-s–t-at-the-screen kind of movie.”

JoBlo critic Chris Bumbray:
“Smith’s weak dialogue is the most disappointing part, as his strength has always been his clever scripts. Love him or hate him, Smith has talent as a writer. But here, it feels like he scribbled each scene right before shooting – that’s how unstructured it is. It takes nearly fifty minutes for the story to actually kick in, which revolves around a Nazi plot linked to Quebec fascist Adrien Arcand (Haley Joel Osment) who was actually a real guy. The idea is that a scientist friend of his created a nazi clone army, which wind up being mini-bratwurst sausage people, all played by Smith himself, who kill people by crawling up their anuses. Sigh.”

Den of Geek critic Edward Douglas:
“Thankfully, Canadians are generally known to have a good sense of humor but if they were ever to declare war on the United States, it’s likely to be over something as blatantly offensive as Yoga Hosers, and who would blame them? Crappy title aside, there’s an equally crappy story at play here, one involving rapey upper classmates inviting the Colleens to a party, only to try to sacrifice them to the devil while townspeople are being killed by these tiny creatures that drill up their buttholes. There’s absolutely no connection between these two subplots, as we later learn these creatures are Nazi sausages or “Bratzis,” all played by Smith himself, whose vocabulary mainly consists of ‘Nein’ and ‘Wunderbar.'”