Both Vindman and Williams were present in the White House’s Situation Room to listen in on the July 25 phone call between President Donald Trump and Ukraine President Volodymyr Zelensky that is at the heart of the impeachment inquiry.

Later that afternoon, Kurt Volker, the former U.S. special envoy to Ukraine, and Tim Morrison, the former top Russia adviser on the National Security Council, testified before the committee. 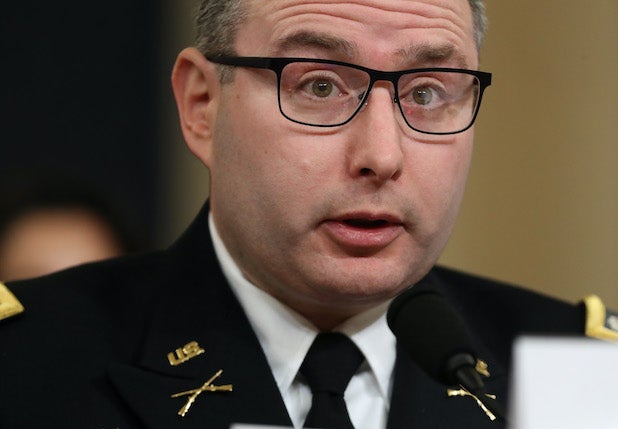 Vindman said he found Trump’s phone conversation with Zelensky to be “improper.”

“I was concerned by the call. What I heard was inappropriate,” Vindman said during his opening statement. “It is improper for the President of the United States to demand a foreign government investigate a U.S. citizen and political opponent. It was also clear that if Ukraine pursued an investigation into the 2016 election, the Bidens, and Burisma, it would be interpreted as a partisan play. This would undoubtedly result in Ukraine losing bipartisan support, undermine U.S. national security, and advance Russia’s strategic objectives in the region.”

The lieutenant colonel said he was compelled to raise concerns about the phone call “out of a sense of duty.”

“My intent was to raise these concerns because they have significant national security implications for our country,” Vindman said. “I never thought I’d be sitting here, testifying before the committee and the American public, about my actions. When I reported my concerns, my only thought was to act properly and to carry out my duty.”

Vindman, a Ukrainian refugee, also addressed his father directly during his opening statement: “Dad, my sitting here today in the U.S. Capitol talking to our elected officials is proof that you made the right decision, 40 years ago, to leave the Soviet Union.”

“Do not worry,” he added. “I will be fine for telling the truth.”

“Vindman is shaking as he reads his opening statement in the impeachment hearing,” tweeted political scientist Miranda Yaver. “Depressingly high odds that President Trump and Fox primetime hosts mock him for that.” 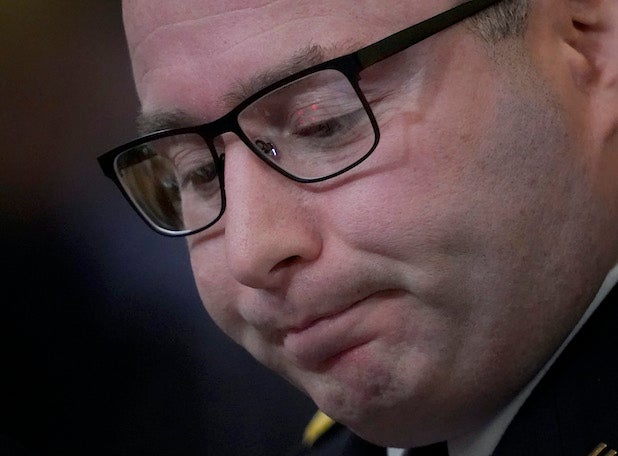 Lt. Col. Alexander Vindman was visibly shaking as he gave his opening remarks and declared that character attacks against witnesses are “reprehensible.”

“These vile character attacks on these distinguished and honorable public servants is reprehensible,” Vindman said. “We are better than personal attacks.”

Last Thursday, Trump disparaged the former ambassador to Ukraine, Marie Yovanovitch, as she gave her testimony before the House Intelligence Committee. His comments, which Yovanovitch described as “intimidating,” led Chairman Adam Schiff to question whether Trump’s real-time tweets counted as “witness intimidation.”

Vindman himself was also subjected to unfounded attacks by Fox News host Laura Ingraham and one of her guests, who suggested that Vindman was involved in “espionage.” (Ingraham and the guest, the attorney John Yoo, were both criticized across party lines for their remarks.) 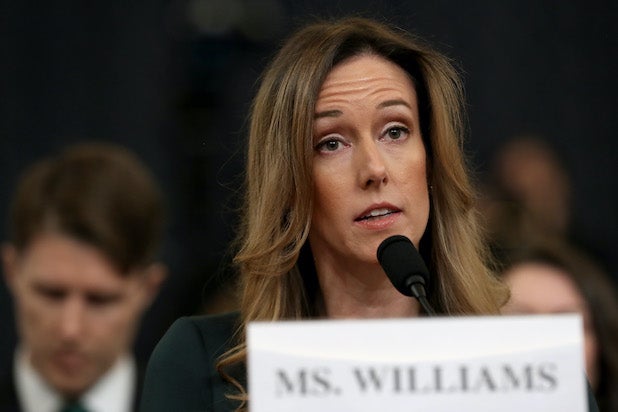 3. Jennifer Williams says she was “surprised” by Trump’s tweet about her

“It certainly surprised me,” she admitted. “I wasn’t expecting to be called out by name.”

Himes said he was surprised too, then added that it “certainly looks like witness tampering” — a statement that mirrors how Schiff described Trump’s similar disparaging remarks about Yovanovitch last week.

In his Sunday tweet, Trump wrote, “Tell Jennifer Williams, whoever that is, to read BOTH transcripts of the presidential calls, & see the just released ststement [sic] from Ukraine. Then she should meet with the other Never Trumpers, who I don’t know & mostly never even heard of, & work out a better presidential attack!” 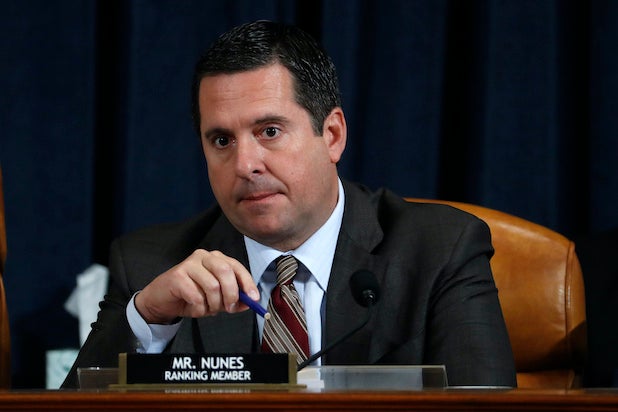 4. In his opening statement, ranking member Devin Nunes attacks the press as “puppets for the Democratic party”

Rep. Devin Nunes (R-Calif.) used his opening remarks to largely attack the press for its coverage of the impeachment hearings, calling members of the media “puppets for the Democratic party” and again focusing on the identity and motivations of the whistleblower.

5. House Democrats defend Vindman, a veteran and American citizen, from Republican inquiries about his patriotism and loyalty

House Republicans and the staff counsel, Steve Castor, questioned Vindman’s loyalties to America by asking him about a job offer he received from a Ukrainian official for the position of defense minister in Kyiv.

“I’m an American. I came here when I was a toddler, and I immediately dismissed these offers, did not entertain them,” Vindman said. “The whole notion is rather comical that I was being asked to consider whether I’d want to be the minister of defense. I did not leave the door open at all. But it is pretty funny for a lieutenant colonel in the United States Army, which is really not that senior, to be offered that illustrious a position.”

Later, Rep. Jim Jordan (R-Ohio) brought up a comment made by Vindman’s former boss at the NSC, Tim Morrison, that he and Fiona Hill “had concerns” about Vindman’s “judgment” — a quote that was also shared by the White House’s official Twitter account.

“Any idea why they have those impressions?” Jordan asked Vindman.

“Alex is a top one percent military officer and the best army officer I have worked with in my 15 years of government service,” Hill’s review of Vindman said. “He is brilliant, unflappable, and exercises excellent judgment.”

“I can’t say why Mr. Morrison questioned my judgment. We had only recently started working together, he wasn’t there very long and we were just trying to figure out our relationship,” Vindman said.

“I never did, never would. That is preposterous that I would do that,” Vindman responded.

“They’ve accused you of espionage and dual loyalties. We’ve seen that in this room this morning. The three minutes that were spent asking about the offer made to make you the minister of defense, that may have come cloaked in a Brooks Brothers suit and in parliamentary language, but that was designed exclusively to give the right-wing media an opening to question your loyalties. I want people to understand what that was all about,” Himes said. “It’s the kind of thing you say when you’re defending the indefensible. It’s what you say when it’s not enough to attack the media, the way the ranking member gave over his opening statement, or to attack the Democrats, but it’s what you stoop to when the indefensibility of your case requires that you attack a man who’s wearing a Springfield rifle on a field of blue above a Purple Heart.”

6. Nunes and Vindman have tense exchange

🔥 from VINDMAN, correcting @DevinNunes for referring to him as “Mr. Vindman,” instead of “Lt. Col. Vindman.” pic.twitter.com/rlpBrpsHUa

When Vindman declined to name the intelligence officials he spoke to about the phone call to protect the whistleblower’s identity, Nunes asked if he was going to “plead the fifth.”

“Excuse me, on behalf of my client, we’re following the rule of the committee, the rule of the chair with regard to this issue. This does not offer an answer that is invoking the fifth or any theoretical issue like that,” Vindman’s attorney, Michael Volkov, interjected. 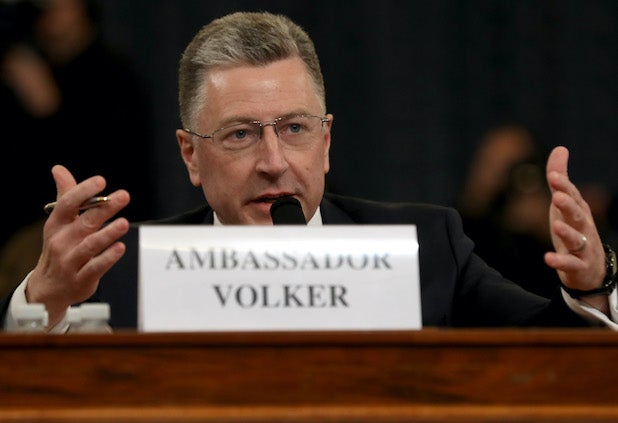 7. Ambassador Kurt Volker says he believes Biden is an “honorable man,” accusations of impropriety in regards to Ukraine are “not credible”

The second round of witnesses came before the House Intelligence Committee near the seventh hour of hearings. Kurt Volker, the former special envoy to Ukraine, said he didn’t believe that the accusations of impropriety against Biden were “credible.”

“I don’t think that raising the 2016 elections or Vice President Biden or these things I consider to be conspiracy theories that have been circulated by the Ukrainians [are the things] that we should be pursuing as part of our national security strategy with Ukraine,” he added. 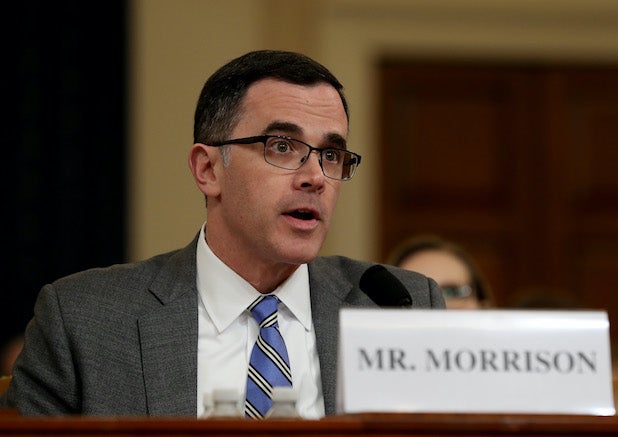 8. Tim Morrison, the former top Russia adviser on the National Security Council, says he had no concerns about Trump’s call with Zelensky but worried about the impact of disclosing the call to the public

Morrison, who listened to the call from the White House Situation Room, said he did not have concerns about the July 25 call. But he did fear how the public release of the conversation “would play in Washington’s political climate.”

“My fears have been realized. I understand the gravity of these proceedings, but beg you not to lose sighted of the military conflict underway in Ukraine today,” Morrison said.

During Democratic counsel questioning, staff counsel Daniel Goldman inquired whether Morrison would consider “asking a foreign government to investigate a domestic political rival” as being “inappropriate.”

“It is not what we recommend the president discuss,” he responded.