“Kick-Ass” is the movie last year’s woefully bloated, dullsville “Watchmen” wished it could be.

Both films trade on the powerful sway comic-book superheroes exert culturally on contemporary readers and audiences. These buff crime fighters are the 20th and 21st century successors to Hercules, Achilles and Ulysses.
Like those fabled ancient heroes, their appeal lies in the fact that they are human, but at the same time stronger, better and more heroic versions of man. 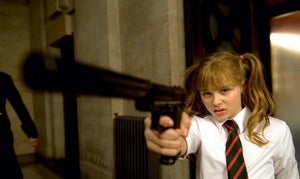 They’ve also always been violent in dispatching their nemeses, but with the blows softened by captions reading "Pow!" and "Wham!" When these crime fighters moved to the big screen, the captions were still there — except in hokey dialogue and exaggerated sound effects.
Of course, as times change, so do superheroes. Though Superman’s blue and red costume remains essentially the same (maybe a tad tighter, thanks to advances in synthetic fabrics), the foes he faces have evolved over the decades. Lex Luthor still skulks about to challenge Clark Kent’s better half, but Superman’s other opponents have gone from Tommy gun-toting gangsters to drug dealers to megalomaniacal real-estate developers. (Why doesn’t someone cast Donald Trump in one of these movies?)
And the campy approach has had to change as well, as updates like “The Dark Knight” have so successfully proven.
“Kick-Ass,” indeed, takes the Christian Bale Batman several miles farther.
It begins with its dweebish teen hero, Dave Lizewski (Aaron Johnson), posing a simple question: “How come nobody’s ever tried to be a superhero?”
Dave proceeds to attempt exactly that, ordering a body-hugging, lime-green scuba outfit off the internet for his costume and adopting the superhero moniker Kick-Ass.
This being a thoroughly contemporary film, Dave starts a MySpace page for Kick-Ass and asks those in need of his alter ego’s crime-fighting services to email in their requests.
When a cell phone video of Kick-Ass goes viral, scoring millions of hits on YouTube, he becomes famous. Soon, he finds himself joined by three other would-be, all-too-human superheroes, including Hit Girl (Chloe Grace Moretz), a foul-mouthed 11- year old as adept at using knives and firearms as the hero of any John Woo movie.
She, with a little help from Dave, proceeds to wipe out the entire operation of a vicious New York drug kingpin.
The violence already is causing some stir on the web and in film circles, much of it jump-started by the esteemed Roger Ebert.
In his review, in which he gave “Kick-Ass” a mere one and half stars, he points to one scene he especially found troubling: where “an adult man brutally hammers" the 11-year-old girl to "within an inch of her life.”
“Will I seem hopelessly square,” Ebert asks, “if I find ‘Kick-Ass’ morally reprehensible and will I appear to have missed the point?”
Well, Roger … yes.
It’s true, if you have a particularly delicate stomach and object to seeing seeing heads lopped off, limbs getting hacked, bodies exploding and being crushed, you might have a problem with “Kick-Ass.” Especially because much of that mayhem is committed by an 11-year old girl.
But while it’s violent, it’s also a heck of a lot of fun as it upends the tired formula for superhero films. It cleverly dissects the superhero phenomenon even as it celebrates it. It’s smart and it’s a hoot and that’s a winning combo.
As he proved so handily in “Layer Cake,” director-cowriter Matthew Vaughn knows how to give a lively goose to the oldest and most hackneyed of movie clichés. There is a final, extended shootout scene here that references one of Quentin Tarantino’s in “Kill Bill” and then tops it, deploying violence and humor to dazzling effect.
It will have you gasping in shock — Hit Girl is central to it — even as you’re laughing.
Would I want to see an 11-year kid, male or female, whacking folk in real life? Of course not. But Hit Girl and "Kick-Ass" are so removed from reality that a viewer can appreciate the character for the clever conceit that it is.
The critics need to chill.
(Trivia Note:  Wondering why that big Claudia Schiffer billboard is so prominently displayed in a “Kick-Ass” scene? That’s wife placement, not product placement. The English-born Vaughn has been wed to the German supermodel since 2002.)
x
Looks like you're enjoying reading