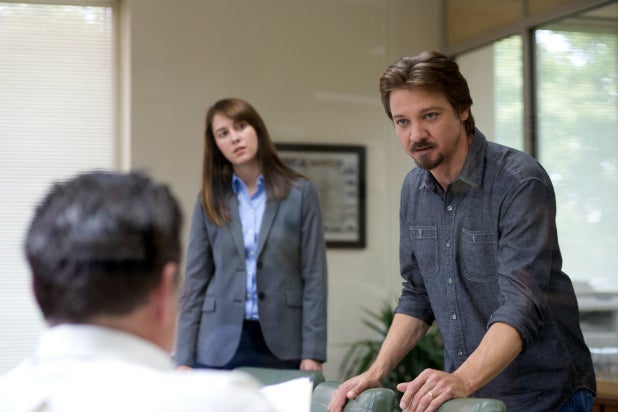 In the right filmmaking hands, a movie about the signing of the Declaration of Independence, or the rescue of Apollo 13, or even the Allied victory in World War II can still generate genuine suspense, even though we know the outcome of the story. At other times, however, our knowledge of real-life events hovers like a shroud over the movie, preventing us from caring too much about how everything’s going to turn out.

“Kill the Messenger,” a biopic about Gary Webb, the San Jose Mercury News reporter who first connected the influx of crack cocaine into the United States in the 1980s with the CIA’s illegal funding of the Nicaraguan contras, fits in the latter category. That journalistic triumph came at great cost to Webb, but the movie never finds its way out of the shadow of “All the President’s Men” and any number of other stories about courageous muckrakers.

The tale behind this kind of newsgathering promises provocative excitement, but “Messenger” tends to dwell on scene after scene of dramatically unsatisfying “I’m right, and you’re wrong” exchanges (much like Season One of “The Newsroom”) without spending enough time on the mechanics of journalism and the government, and the risks behind revealing big secrets, and the personal price to be paid by the people who do so (which is what made Season Two of the “The Newsroom” so much better).

Jeremy Renner stars as Webb, who comes off like a bizarre caricature of a concerned, anti-establishment rabble-rouser; with his goatee, his aviator shades, his vintage MG and his Clash albums, this guy feels as much like a cartoon as Roland Burton Hedley, Jr. from “Doonesbury.” (It’s worth noting that the same can’t be said of the real Webb, at least based on the home-movie footage of him that appears over the closing credits.)

Covering a story about government seizure of drug dealers’ property, even when those dealers wind up being acquitted, Webb stumbles upon a grand jury transcript that suggests that a major drug kingpin is actually a longtime government operative. He follows a trail through criminal lawyers and drug dealers (Michael Kenneth Williams of “The Wire” is effectively but unimaginatively cast as the latter) all the way to Managua, where imprisoned narco kingpin Meneses (Andy Garcia) connects dots that lead all the way to Oliver North and the CIA.

Normally, this kind of movie would end with the triumphant publishing of the story, but Webb’s initial success occurs at the midway point. A week or two after publication, however, the CIA strikes back, with Langley’s invisible hands stoking doubts and controversy about Webb among his scooped peers at The New York Times, the Washington Post and the Los Angeles Times. As a government informant played by Michael Sheen tells Webb, the reporter is being “controversialized,” with accusations about the messenger being used to distract attention from the message.

This all comes off as more interesting in the synopsizing than in the actual telling; screenwriter Peter Landesman (“Parkland”) and director Michael Cuesta (“L.I.E.,” the “Homeland” pilot) bobble their portrayal of journalism early on — you’ll flinch if you know the first thing about newspaper captions or the inverted-pyramid style of reportage — and they (along with Renner) never make Webb a captivating enough character to follow through the ups and downs of this saga.

The ensemble cast is filled with lots of great actors (Williams, Garcia, Sheen, Tim Blake Nelson, Dan Futterman, Richard Schiff, Oliver Platt) who make the most out of a scene or two, while allowing the women not much at all. Mary Elizabeth Winstead barely registers as Webb’s wishy-washy editor, and poor Rosemarie DeWitt gets saddled with a terminally underwritten wifey role: Sometimes she’s a nag, and sometimes she’s supportive, but she never gets to be anything beyond a tennis ball with whom Renner occasionally makes eye contact.

The intent of the film, and its timeliness, are beyond reproach, but that doesn’t make “Kill the Messenger” as stirring or inspiring of indignation as it clearly wants to be. There’s nothing about this film’s portrayal of the characters, or the drug trafficking, or the conspiracy to discredit Webb that a documentary on the same subject couldn’t have achieved more successfully. Creating a docudrama allows for certain narrative leeway, and if you’re not going to use that flexibility to craft an engrossing piece of based-on-a-true-story fiction, why bother telling the story at all?

Webb’s coverage turned out to be true, but two hours of “I stand by my story” doesn’t make for stirring cinematic storytelling. As cause-driven movies go, well, at least they got the cause right.