Luke Jennings, who authored the books the BBC America/AMC series “Killing Eve” is based on, wrote in The Guardian on Friday that he is less than pleased with how the April 10 series finale played out, saying the final episode took him “aback” and lamenting that it was “bowing to convention.”

SPOILERS for the series finale:

Everything appears to be ending on a high note as Villanelle (Jodie Comer) and Eve (Sandra Oh) finally share a real kiss — until the final moments when Villanelle is gunned down and killed, with Eve left screaming.

Jennings notes that he was advised of the decision to kill off the colorful assassin ahead of time, and knew fans would be upset, particularly since TV shows kill off their LGBTQ characters so frequently that it’s become a well-known trope.

“A truly subversive storyline would have defied the trope which sees same-sex lovers in TV dramas permitted only the most fleeting of relationships before one of them is killed off (Lexa’s death in ‘The 100,’ immediately after sleeping with her female love interest for the first time, is another example). How much more darkly satisfying, and true to ‘Killing Eve’s original spirit, for the couple to walk off into the sunset together? Spoiler alert, but that’s how it seemed to me when writing the books.” 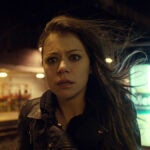 To fans who are upset with Villanelle’s death, he promised, “[T]o those fans, I would say this: Villanelle lives. And on the page, if not on the screen, she will be back.”

While “Killing Eve” is over, a prequel spinoff about Fiona Shaw’s character Carolyn Martens, is in development, according to Deadline.