The official Twitter account for the BBC America drama series “Killing Eve” posted a 30-second teaser trailer for the fourth and final season Tuesday, offering a preview of what’s to come ahead of the season’s the Feb. 27, 2022 premiere.

“Actions have consequences,” said the tweet. In the “Killing Eve” Season 4 trailer, Sandra Oh’s Eve Polastri and Jodie Comer’s Villanelle appear together, at times riding an electric scooter. Fiona Shaw’s Carolyn Martens also makes an appearance, spitting at someone or something off-camera and narrating the clip: “Do you ever think what might have happened if we didn’t do what we did? People like us aren’t made for happy lives or happy endings.” 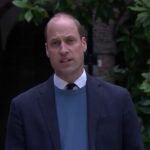 As the narration teases the impossibility of a happy ending for the lead characters, Polastri is shown in an empty theater and there’s even a kiss. Eagle-eyed fans also spotted new characters in the brief clips.

The new season will see Polastri’s obsession with Villanelle come to a head. While fans joked on Twitter that they’d already seen most of the content in the teaser through other releases and leaks, the “Killing Eve” account replied, “We brought captions though.”

Check out the teaser — with captions, of course — above or below.