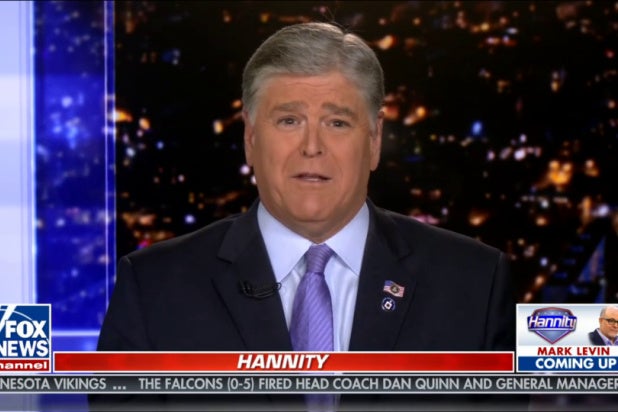 Fox News’ Brian Kilmeade doesn’t think primetime host Sean Hannity has a future in morning television because, among other things, he smells “like liquor” in the wee hours.

Kilmeade, typically a co-host of the 6 a.m. ET show “Fox & Friends,” filled in for Laura Ingraham at 10 p.m. Wednesday. During the toss between “Hannity” and “The Ingraham Angle,” Hannity offered to give his colleague a Thursday morning wake-up call.

“Now, I usually go to bed, Brian, about 3 or 4 a.m. If you’d like, I’ll call you and give you a wake-up call. No excuses if you’re tired tomorrow,” Hannity joked.

Also Read: Hannity Hits Back at Boehner for Calling Him a 'Nut' in His Upcoming Book: 'He's Weak'

Kilmeade bantered back, asking if Hannity had any interest in filling in for him on the morning show, which would require a trip into Manhattan before dawn.

“The odds of me getting up in time to be ready for ‘Fox & Friends’… pretty low,” said Hannity, who advised he’d need a little bit more of a warning if he were ever to take a morning slot.

“And you’ll smell like liquor,” said Kilmeade. “We don’t want that.”

The crews for the shows could be heard laughing in the background.

Watch the exchange below, via Fox News.

Hannity: "I don’t go to bed until 3 or 4 a.m. I'm a night owl. The odds of me getting up in time to be ready for Fox and Friends are pretty low…"

Kilmeade: "And you'll smell like liquor. So, we don't want that."