Kim Dickens will making her long-awaited return as Madison Clark in the second half of “Fear of the Walking Dead” Season 7 — and as a series regular after that.

The “Walking Dead” spinoff series has been renewed for Season 8 at AMC, the cable channel said Monday, with Dickens set to make her comeback as the presumed-dead Madison (who hasn’t been seen since Season 5) in the back half of Season 7, which debuts Sunday, April 17. Dickens will then continue on as a series regular in “Fear the Walking Dead” Season 8.

Per AMC: “In the second half of Season 7, months have passed after the nuclear blast and the only one thriving is Victor Strand (Colman Domingo). Having built a fiefdom, he callously selects who will have a chance at life. The other members of the group have suffered immensely, but out of that, has come a fierce determination to live, even if it means taking Strand’s Tower by force and continuing the search for Padre, a mythical place no one is sure really exists. Alicia (Alycia Debnam-Carey), now the reluctant leader to Teddy’s former followers, is plagued by a mysterious illness and the repercussions of her past actions. Morgan (Lennie James,) trying to maintain hope that he will be reunited with his family, knows Alicia is key to their survival. With Alicia declaring war, Strand’s paranoia and personal vendettas grow, and with that, new threats emerge from all sides.” 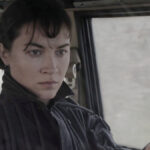 Readers can watch a sneak peek of “Fear the Walking Dead” Season 7 Part 2 via the video above.

“If there were a Mt. Deadmore, Kim Dickens’ face would be on it.  Madison Clark is a foundational character to TWDU — heroic, complex, an everyperson who becomes a warrior and then a force of benevolence,” said Scott M. Gimple, Chief Content Officer of “The Walking Dead” Universe. “Kim Dickens’ raw talent, strength, and brilliance will electrify TWDU once more and we couldn’t be luckier to have her back.”

The series hails from AMC Studios.