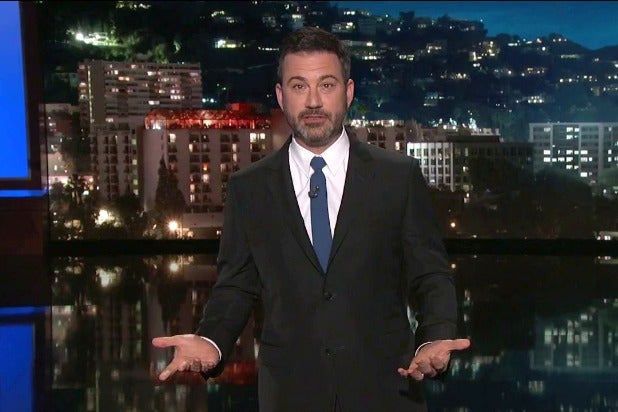 It’s been a wild week for Donald Trump so far, with a significant amount of bad news heading in his direction at a pretty fast pace, with the story about Michael Cohen using a shell company to sell access to Trump after setting up that same shell company in order to pay off Stormy Daniels back in 2016. Jimmy Kimmel didn’t have a ton of patience for Trump’s whining tweet about how negative the media has been in its coverage of his administration.

“Not only is Trump pulling out of the Iran deal, he’s now threatening to pull media credentials for reporters he doesn’t like. The president lashed out at journalists on Twitter this morning.,” Kimmel said.

Kimmel then went over Trump’s Wednesday tweet in which he said the following: “The fake news is working overtime. Just reported that, despite the tremendous success we’re having with the economy and all things else, 91% of the network news about me is negative (Fake). Why do we work so hard in working with the media when it is corrupt? Take away credentials?”

“Sure, why not? That sounds patriotic,” Kimmel said. “But 91 percent is a very specific number. Where would he get a number like that? Let’s see. Trump tweeted that at 7:38 a.m. Exactly 30 minutes after this:

Kimmel then played a clip from “Fox and Friends” where Ainsley Earhardt delivered the line that almost certainly inspired Trump’s tweet. “If you look at the polls, it’s pretty astronomical. ABC, CBS, NBC — according to Media Research Center — 91 percent of their coverage, according to MRC, is negative,” Earhardt said.

“Looks like somebody carved a little time out of his schedule to watch some of ‘Fox and Friends’ this morning. He can save a lot of time if he just gave Fox News his twitter password — he could save who knows how much time?” Kimmel joked.

“And by the way, I’m pretty sure 91% of the coverage of the Ebola virus was negative too. Didn’t make it fake news.”

You can watch Wednesday’s episode of “Jimmy Kimmel Live” on ABC.com right here or on the ABC app.