One of the weirder bits of news this week — which is saying something because this has been a really weird week — is that some Republicans are pushing for Donald Trump to be considered for the Nobel Peace Prize due to his supposed role in bringing peace to North and South Korea. It’s a confusing notion and one that Jimmy Kimmel tried to provide some perspective on this concept on Thursday night.

“Republicans in the House believe President Trump deserves a Nobel Prize for all this. And the president of South Korea agrees. Republicans nominated him for the Nobel Prize for peace, which if it happens I imagine would look something like this,” Kimmel said before presenting a video in which the nominees for the 2019 Nobel Peace Prize are announced.

(Before we go any further, we should probably note that the Nobel prizes do not work like this. Nominees for each of the four prizes are not announced, and in fact, those lists are sealed for 50 years after that year’s award is given. So even if Trump ends up as a top candidate, he’ll never know unless he actually wins since he’ll be long dead 50 years from now. Okay, that’s the end of this humorless aside.)

In the video, a woman stands on a stage and presents three nominees for the Nobel Peace Prize and video montages of their good deeds: a fictional doctor who helps refugees in the Sudan; a fictional Indonesian mayor who was instrumental in helping his region recover from the catastrophic floods that hit the country back in February; and Donald Trump.

Trump’s montage, in contrast to those of the other nominees, includes many of Trump’s greatest hits, such as his campaign joke about how he could shoot somebody in the street and get away with it, “grab them by the p—- ” and the “fire and fury” threat he made to North Korea before that situation resolved itself.

After the video played, the clearly shaken presenter closed the announcement with this line: “Congratulations to all the nominees. God has forsaken us.”

You can watch Kimmel’s fake Nobel nomination ceremony in the video at the top of this post, about four minutes in.

The monologue from Thursday night’s “Jimmy Kimmel Live!” had plenty of other jokes about Trump’s whole thing with North Korea — the topic took up about half of it. Kimmel opened that thread by talking about the three Americans that were recently freed from North Korean custody, who returned to the U.S. early Thursday morning. Trump met their plane when it arrived for a photo op, and it went probably about as awkwardly as you would have expected. Which is to say it was very awkward.

Kimmel played a clip of Trump greeting the freed men at the airplane’s door, with the clip dubbed over to make it sound like Trump was very forcefully declaring “you’re welcome” over and over to them as he shook their hands. Kimmel wanted to point out one particularly weird thing Trump did during that interaction.

“Did you see that move? The moment with the handshake — let’s look at that handshake again,” Kimmel said. The part he was referring to is when one of the moon steps out of the plane holding up a peace sign, and Trump did, uh, this: 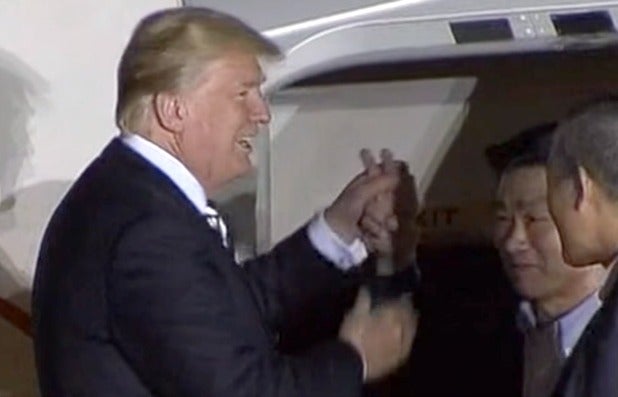 “He’s got the peace sign and Trump just kinda squeezes it,” Kimmel said, leaving a long pause before he said “squeezes.”

“Maybe he thought it was time for a quick game of ‘Rock, Paper, Scissors’? I don’t know.”

Kimmel delivered a couple more quick zingers about Trump’s weird late-night moment, from the part where the president boasted about how good the TV ratings probably were at that moment to his inexplicable compliment paid to the guy who had locked up the men.

“The president, of course, was very upbeat. He finally got this positive coverage he so desperately craves, and he took time out to not only thank the assembled media but to remind us of what really is most important in life,” Kimmel said before playing a clip of the part where Trump bragged that they were probably earning “the all-time in history television rating for 3 o’clock in the morning.”

“Yes, what a historic day to celebrate Nielsen ratings he really has nothing to do with,” Kimmel quipped.

“And then – he actually thanked Kim Jong Un for releasing the men and for treating them well. Right. Outside of the whole ‘kidnapping and holding them against their will for nothing’ thing, he was very hospitable.”

Also Read: Seth Meyers Thinks It's Hilarious That Trump Tried to Claim That He Keeps His Promises (Video)

You can watch all of Kimmel’s comments about Trump and North Korea from Thursday’s “Jimmy Kimmel Live!” monologue in the video embedded at the top of this post.