On Tuesday’s episode of “Jimmy Kimmel Live,” Kimmel was pretty unnerved by the report that back in 2019, President Donald Trump wanted to sic government agencies on him and other late-night Trump critics. But the ABC host still offered to send the disgraced former president a complimentary sweater.

Kimmel was referencing a report from The Daily Beast on Tuesday, which said in part: “According to two people familiar with the matter, Trump asked advisers and lawyers in early 2019 about what the Federal Communications Commission, the court system, and—most confusingly to some Trump lieutenants—the Department of Justice could do to probe or mitigate ‘SNL,’ Jimmy Kimmel, and other late-night comedy mischief-makers.”

“I’m glad you’re excited about it. I don’t know – I don’t want him probing me,” Kimmel joked. “Can you imagine that? President Snowflake asked to send the authorities in — to stop us from making fun of him.” 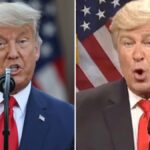 “The report goes on to say,” Kimmel continued, “‘To those who heard it, Trump’s inquiries into what federal regulations could be used to bust the likes of Kimmel and ‘SNL’ was more of a nuisance than a constitutional crisis.’ To me it more like a crisis than a nuisance. I don’t know.”

“Little did I know — I’m up here goofing on him — he’s asking the feds to do who the hell knows what? And when he was told there was no legal case to be made — that you can’t stop comedians from making fun of you when you’re president — Trump asked, “Can something else be done about it?”

“Basically, Trump wanted to turn the Department of Justice into, remember on the old Batman show? The Penguin had those henchmen in the bowler hats and the tight black shirts?” Kimmel continued. “This is what Trump wanted. A goon squad. A bunch of tough guys to go rough people up. Because he can’t take a joke.”

“He can make one,” Kimmel added. “In fact, he’s made several: Eric, Ivanka, Don Jr, but he cannot take a joke.” 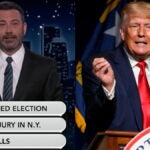 Kimmel noted that the incident is said to have happened right around the time Trump had his meeting with North Korean dictator Kim Jong Un. “Maybe he got the idea from him! I could be dog food right now,” he joked. “I’d be like, ‘Alec Baldwin’s the one you want! He dressed up as you!'”

Then Kimmel read from the statement Trump released denying the Daily Beast report and saying that late-night comics who insulted him should be considered “an illegal campaign contribution from the Democratic Party.”

“Anyway, thanks for watching, Mr. Former President. I’ll send you a hoodie if you like. You still a triple XL?” Kimmel concluded.

Watch the entire monologue from Tuesday’s “Jimmy Kimmel Live” above.