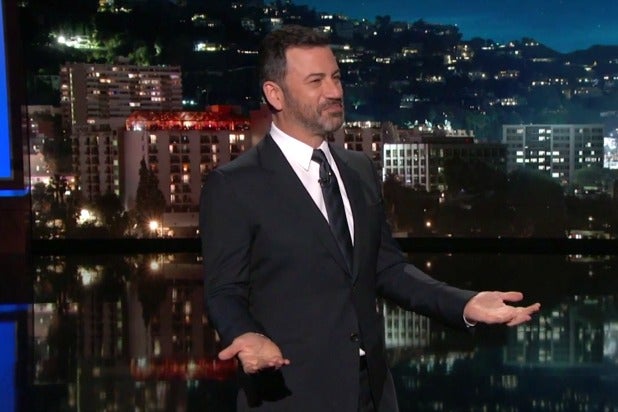 So one of the weirder stories in the Trump administration on Wednesday involved White House chief of staff John Kelly, who made some interesting facial expressions and rolling his eyes at the NATO summit while Trump ranted about Germany being “totally controlled by Russia.” And Jimmy Kimmel spent a chunk of his monologue making fun of him and the strange excuse that Sarah Huckabee Sanders came up with for the whole thing.

“This was interesting — at the breakfast, I want you to pay attention to the body language from chief of staff John Kelly here because a lot of people took notice,” Kimmel said as the show played the clip of Kelly doing his thing.

“Rolling his eyes, he couldn’t wait to get up. It was like he was on a blind date with a woman who turned out to be his cousin,” Kimmel joked. “A lot of people noticed this. So many, in fact, that the White House press secretary, Sarah Huckabee Sanders, felt the need to explain.

“So she released a statement — this is real, we did not make this up. She made this up. She said John Kelly, the reason he looked like that, he ‘was displeased because he was expecting a full breakfast and there were only pastries and cheese.’ What in the world? Is this NATO or the Hometown Buffet? What’s going on? And who knew John Kelly was so anti-continental breakfast?”

Kimmel also took aim at Trump for the various comments he made during that meeting.

“Our president, the orange guy Trump, is in Belgium right now at the NATO Summit, fighting over how many ways they will split the check,” Kimmel said. “Things got off to a rocky start. They had a breakfast meeting today with the NATO secretary general, where Trump complained that he wants other countries to spend more for defense.

“Which, Donald Trump attacking others for not paying their fair share is ballsy. It’s basically the Trump business plan.”

Kimmel also got on Trump for the harshest comment he made, about German reliance on Russia for oil.

“He had especially harsh words for Germany. He repeatedly said Germany is ‘totally controlled by Russia.’ Which is also a good one coming from him,” Kimmel said. “He attacks Germany for making a deal with Russia — on his way to make a deal with Russia.”

After the NATO meeting, Trump is heading to London for a few days before then going to Finland to meet with Russian President Vladimir Putin.

You can watch Wednesday’s episode of “Jimmy Kimmel Live” in full on ABC.com here or on the ABC app.