During his monologue Wednesday, Jimmy Kimmel was delighted by the enormous defeat handed to right wing conspiracy theorist Alex Jones.

Jones lost big in court on Wednesday, as the Connecticut civil jury ordered him to pay $965 million to the families of the children murdered in the Sandy Hook massacre in compensation for years of harassment, slander, lies and threats Jones lobbed against them. Jones claims he’s bankrupt and can’t pay it, but whatever the case, it’s great news for the people he tormented and terrorized. 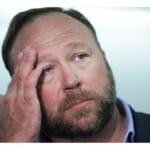 “Today was a rough day for the despicable and ridiculous Alex Jones,” Kimmel said as he got to the topic near the end of his monologue. “Alex Jones was ordered today by a jury in Connecticut to pay $965 million in damages to the families of eight victims of the Sandy Hook massacre, which he repeatedly called a hoax.”

“He tormented these families. He accused them of faking their children’s deaths,” Kimmel continued. “In August, a jury in Texas ordered him to pay about $50 million to the parents of another victim of Sandy Hook, which means, between the two cases, he now owes these parents over a billion dollars in damages.”

“I guess the good guys just won the InfoWars is what happened there,” Kimmel joked.

Kimmel noted that Jones insists he won’t pay any of this money, and that after the verdict, Jones “had a full-on hissy fit as the verdict was read.” Kimmel then played footage of Jones’ reaction to the whole thing — including him pitching his quack health supplements. “See what it does for your body,” Jones said.

“Yeah, well we can see what it’s doing for your body. I mean, for a sunburned walrus, you look fantastic,” Kimmel reacted. “Now go get that money for those parents, you disgusting pink garbage person.”

Watch the whole monologue in the video above. 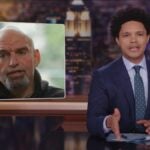