Donald Trump had a couple, shall we say, viral news items on Wednesday — items that are hilarious and stupid rather than terrifying and serious. One of them was the report that Trump thought Canada burned down the White House during the War of 1812, which Colbert mocked him for Wednesday night. And the other, which Jimmy Kimmel went in on Wednesday night as well, involved Trump putting his water bottle on the floor for no apparent reason during a televised meeting, and Mike Pence following suit for no apparent reason beyond just that Trump did it.

That awkward moment came during a meeting with FEMA, which people were paying attention to because it also happened to be Melania Trump’s first televised appearance in several weeks. In case you missed it on Wednesday, you can see the moment in question in this tweet:

I am laughing so goddamn hard at this video of Trump inexplicably putting his water bottle on the floor, and Pence immediately doing the same for no reason whatsoever. pic.twitter.com/qEFPzKClYj

Kimmel had a joke specifically at Pence’s expense over this whole bizarre incident.

“Later in the meeting, the president — roll this tape here, because the president for whatever reason, you see he takes his water bottle and puts it down on the floor, then Mike Pence does his too. It’s like Trumpy-see, Trumpy-do. he’s for sure a ‘Westworld’ robot, right?” Kimmel asked, to which his studio audience replied with a resounding “Yeah!” in unison.

The joke came at the end of a sequence where Kimmel poked fun at one of the big stories of the past couple days — Melania’s disappearance for weeks before finally reemerging earlier this week.

“I want to mention our first lady, Melania Trump, who made her first TV appearance in 26 days today. Melania, if you don’t know, has been MIA. following a routine kidney procedure last month. Her absence led to much speculation about her whereabouts, and that speculation led to this tweet,” Kimmel said before going over Donald Trump’s typically ornery Twitter response to the speculation. ” ‘The Fake News Media has been so unfair, and vicious, to my wife and our great First Lady, Melania. During her recovery from surgery they reported everything from near death, to facelift, to left the W.H. (and me) for N.Y. or Virginia, to abuse. All Fake, she is doing really well!’ I hadn’t heard any of these rumors, by the way. So thanks for filling me in on that.

“By the way, tweeting the media has been unfair to Melania is a very ballsy move coming from a guy who hooked up with a porn star while she was still breastfeeding their newborn. That’s our fella. That’s how he works. Then, because that wasn’t enough, six minutes later he added, ‘Four reporters spotted Melania in the White House last week walking merrily along to a meeting. They never reported the sighting because it would hurt the sick narrative that she was living in a different part of the world, was really ill, or whatever. Fake News is really bad!’ Right.”

Kimmel, of course, took exception to the idea that Melania was doing anything “merrily.”

“Let me tell you the only time we’ll see Melania walking merrily along any-where is to her lawyer’s office to get the final papers signed,” Kimmel joked. “So whatever the case, she’s back, being best, she accompanied the president on a visit to FEMA this afternoon. If anyone had any doubts about her well-being, those were quickly put to rest.”

Also Read: Colbert: 'Everything You Think Happened With Donald Trump Is Always Exactly What Happened' (Video)

Kimmel then presented a modified version of the video in which Trump introduced Melania, sitting next to him at the head of the table at the meeting. But in the “Jimmy Kimmel Live” version of the video, Melania was replaced with a dummy wearing large sunglasses and Melania’s standard khaki trench coat. 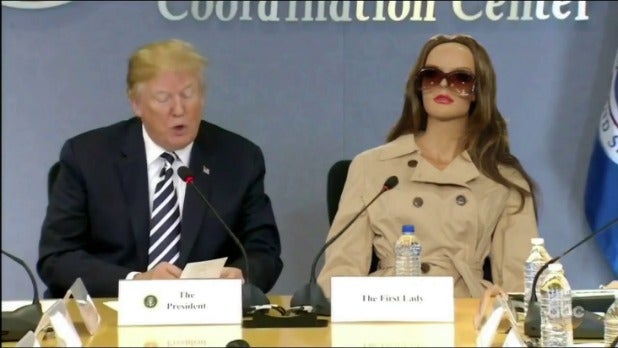 “Hey, you know what? They look great, it’s good to see them back together,” Kimmel said.

You can watch Wednesday’s episode of “Jimmy Kimmel Live” on ABC.com right here on the ABC app.