Jimmy Kimmel was among those who noticed the tone of the recent disagreement between former Vice President Mike Pence and former President Donald Trump. And so in his monologue Monday night, Kimmel spent some time talking about what he joked was “a major celebrity break-up.”

For some catch up, Pence made an appearance at an event held by the right wing Federalist Society over the weekend, during which made a somewhat tepid denouncement of Trump’s constant lies that the Vice President can overturn an election. Here is what Pence said: 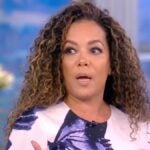 Also Read:
‘The View’ Hosts Are Unimpressed Pence Finally Called Trump ‘Wrong': ‘If The Bar is That Low, My God, Where Are We?’ (Video)

Kimmel brought this up by way of mentioning “a major celebrity break-up over the weekend — Donald Trump and Mike Pence” at the start of his monologue.

“Trump has been blowing the old ‘Pence should have overturned the election’ horn a lot lately. So, on Friday, Mike Pence marched into an event at the Federalist Society in Florida, just a couple hours up the road from Mar-A-Lardo, and after a year of being thrown under the Access Hollywood Bus, Mike Pence finally, kinda — a little bit —  stood up for himself,” Kimmel said, before playing a clip of Pence’s remarks.

“You know what? That’s just a waste of perfectly good chicken is what that is,” Kimmel continued. “But those are strong words. ‘President Trump is wrong’ You know he spent all day practicing that in front of a mirror, as Mother patted him gently on the britches.”

And he didn’t stop there. Pence said there is ‘no idea more un-American than the notion that any one person could choose the American president.’ Well, if that isn’t Stella getting her groove back, I don’t know what is. The Vice Poodle has been unleashed,” Kimmel joked. 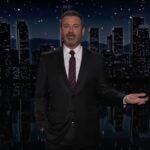 “What a weird turn of events. I thought for sure Melania would dump Trump before Mike Pence did. I guess that means they for sure won’t be running together,” Kimmel added.

“Who will be his running mate? What if he picks his son, DJTJ?  Can you imagine? We have to worry about two Donald Trumps? Don and Donner!”

Watch the whole monologue at the top of the page. The Pence-Trump stuff kicks in right at the beginning.