Yesterday it was reported that Rudy Giuliani turns out to be a contestant on the upcoming season of “The Masked Singer.” And when he was revealed during the season premiere, two of the show’s judges — Ken Jeong and Robin Thicke — walked off the set in protest.

And no surprise, Jimmy Kimmel thinks they did the right thing, and furthermore, while talking about the situation during his monologue on Thursday night, Kimmel said the people at Fox who approved the stunt “should be ashamed of themselves.”

“Speaking of garbage, you know the show ‘The Masked Singer?’ Okay, well, the new season doesn’t premiere until next month, but the identity of one of the singers has been revealed. And his name is Rudy Giuliani,” Kimmel said. “The guy who’s trying to destroy our country? He’s singing on a show.” 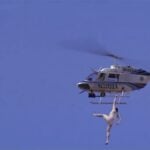 Also Read:
Colbert Suggests Another Game Show Giuliani Could Do but Then Never Come Back (Video)

“Good,” Kimmel added after explaining how Jeong and Thicke reacted. “The only people who should be unmasking Rudy Giuliani is the gang from Scooby Doo, you know? ‘Now let’s find out who the real traitor is!'”

“How does this even happen?” Kimmel continued. “I mean, a lot of people at Fox had to sign off on this. Not one of them was like, ‘Hey, maybe we shouldn’t have the guy who is under investigation for helping to plot an insurrection signing on our show?'”

Then Kimmel got to the point: “Fox network really should be ashamed of themselves. They should have another show called ‘The Masked Executives.’ All the Fox executives come out in costumes; the one who greenlit this idea takes off the mask and gets voted out of television forever.”

You can watch the whole monologue above. The Giuliani stuff is about a minute in.