Donald Trump’s week, and consequently our week as well, just keeps getting weirder, particularly with Trump’s attempt on Tuesday to say that he meant to say “wouldn’t” instead of “would” when he declared during his press conference with Vladimir Putin that he saw no reason to think Russia was involved in the foreign interference in the 2016 election. And Jimmy Kimmel was miffed by the whole thing.

“I have to say, we thought yesterday was the craziest day of this ridiculous presidency. Turned out, today made yesterday feel like a visit to historic Gettysburg,” Kimmel said to begin his “Jimmy Kimmel Live” monologue Tuesday night.

“The news today is that our President is a liar. And not even a good one. President Trump today, in an attempt to explain what the Helsinki was going through his cotton candy-covered head, when he stood next to Vladimir Putin, of all people, and took sides with Russia over our own American intelligence agencies, now says it was just a tiny little slip-up — even smaller than his fists.”

Also Read: Colbert: Trump Earned a Spot in the 'Lying Hall of Fame' for His Russia Walkback (Video)

The show played a clip of Trump fumbling through his attempt at an explanation for the would/wouldn’t mixup, which was met by loud groans from the audience.

“I have to say, when you said, ‘I don’t see any reason why it would be Russia,’ for a minute there it almost seemed like you were hiding something from us,” Kimmel said. “Like there was something Putin knew about you — that you wanted him to keep quiet. Now it all makes sense. Boy, I tell you, Papa John must be at home right now going, ‘Wait, you can do that?’ ”

Kimmel then discussed how baffling the whole thing was, and presented a theory for who he thought may have been responsible for this bizarre PR strategy to claim that Trump simply misspoke.

“What I want to know is, which genius on his team came up with this idea? Who in that administration told him it would be a good idea to announce he meant to say would instead of wouldn’t?” Kimmel asked.

“I bet it was Melania. She hates him the most.”

Later, Kimmel had some jokes about the image that circulated widely on social media Tuesday in which we could see Trump’s prepared statements with his hand-written notes added. 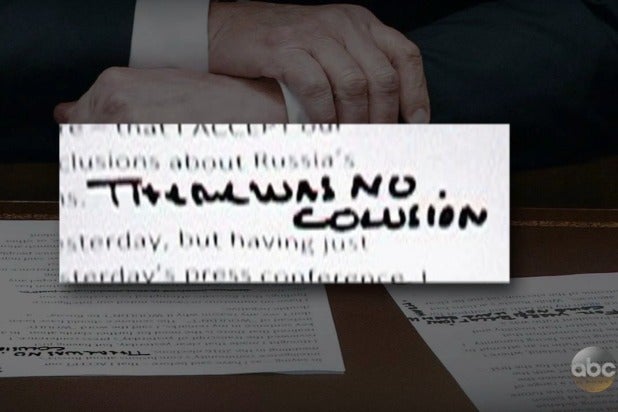 “Someone posted this closeup shot of Trump’s scripted remarks. They wrote this out for him. You can see Trump wrote in by hand, ‘There was no collusion.’ Of course, he misspelled collusion,” Kimmel said. “But this is something he says every 90 seconds, that there’s no collusion. It’s something he wakes up in the middle of the night and shouts. He needed a note to remind himself to say it once again?

“I gotta say, I would rather we had a chimpanzee as president of the United States. At least with a chimp there would be somebody to eat the bugs out of Rudy Giuliani’s hair.”

You can watch Kimmel’s monologue from Tuesday’s “Jimmy Kimmel Live” in the video embedded at the top of this post.