Jimmy Kimmel was not happy Wednesday night with the latest “brazen” Republican effort to “steal this election” — which involves illegally setting up fake ballot boxes in California that are marked as “official” drop boxes. Even though they are not official by any means.

The state of California has ordered the Republicans to stop these illegal efforts, but the Republican party has refused and says it actually will set up more of the fake ballot boxes.

“The California Secretary of State and Attorney General have warned Republicans that if they do not remove those boxes by Thursday, they will face prosecution. But Trump is encouraging them to keep the boxes there and keep on truckin’. Can you imagine this? Setting up boxes and telling people to drop their votes in the boxes? I think what they decided is the best way to prove there was voter fraud is to commit voter fraud.”

Republicans have argued that these fake drop boxes count as ballot harvesting, a practice that allows private individuals or organizations to collect ballots from a group of people and mail them in or drop them off for them. But ballot harvesting must be done by a human being. And drop boxes are not people.

Kimmel pointed out that, well, this whole deal is an easy trick for the Republicans because it’s not as though most folks will know the difference ahead of time between what a real ballot drop box looks like versus a fake Republican one.

Also Read: Kimmel: 'The White House Is Like a Summer Camp with Lice' With All These COVID Cases (Video)

“It’s easy to get confused. You don’t know what your drop off box looks like. Who knows what they look like? It varies from state to state and county to county,” Kimmel said.

But then he showed pictures comparing a real drop box to a fraudulent Republican drop box and, well, it seems pretty obvious now which one is real.

“This is what an official ballot box in Orange County, California looks like. That is the official box,” Kimmel said, as this picture appeared on screen. 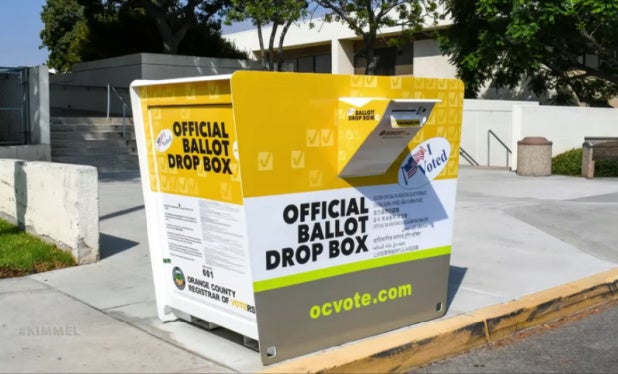 “And this is a filing cabinet,” Kimmel said, as a new photo appeared on screen. 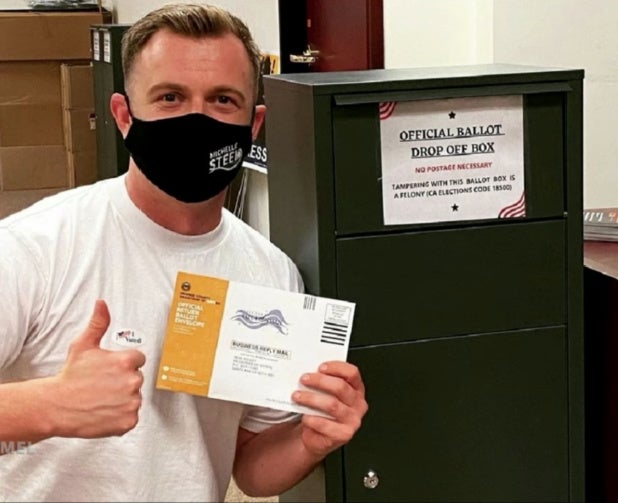 “That’s what the California GOP in Orange County would like you to use. The guy in the picture is the regional field director for them. They should stuff him in that box, is what they should do,” Kimmel quipped.

But then he got serious, reminding viewers to watch out for more attempts by Republicans to tamper with the election.

“Make no mistake about it, there is no limit to what these people will do to steal this vote,” he said. “These boxes are not official, no matter what they say on them. You must make sure, this is so important, you have to make sure you are using an officially sanctioned ballot box.

Kimmel closed this thread with a little skit in which his sidekick Guillermo recorded himself dropping off his ballot. The only problem: the drop box was actually a garbage can with a shredder on top.

You can watch the entire opening monologue from Wednesday night’s episode of “Jimmy Kimmel Live” in the video embedded in this article.