The spat between Jimmy Kimmel and Sean Hannity died down at the beginning of the week after Kimmel apologized for his jokes and Hannity invited Kimmel to his Fox News show to have a “serious discussion.” The two haven’t mentioned each other since then, but Kimmel did manage to slip a dig in Hannity’s general direction during his monologue Thursday night.

The fight heated up when Hannity dredged up an old clip from “The Man Show,” a comedy show that Kimmel hosted for Comedy Central before his “Jimmy Kimmel Live” gig. The clip was from a bit in which Kimmel asked women to guess what was in his pants, which led Hannity to call Kimmel “Harvey Weinstein Jr.”

As you may recall from Monday, Hannity’s final word on the matter involved making a threat that, should Kimmel try to reignite the feud or make more jokes at the expense of Melania Trump, he had more old, unflattering Kimmel clips he could air. While he didn’t directly address the threat or mention Hannity, Kimmel had a bit in his monologue Thursday night that indicates he really doesn’t care if Hannity pulls up more “Man Show” clips, and neither will his audience

The comment came during a sketch at the tail end of Kimmel’s monologue, as part of his discussion of the former Trump doorman who claimed that Trump has a secret lovechild with an old housekeeper.

“You know, they’ve been looking into Trump’s lawyer Michael Cohen and instances in which he and/or The National Enquirer paid people to shut them up. One of the people who got paid is reportedly Trump’s former doorman in New York.  Who says that back in the 80s he was told the president had a love child with an employee,” Kimmel said. “The ex-doorman claimed in a statement released today, ‘While working at Trump World Tower I was instructed not to criticize President Trump’s former housekeeper due to a prior relationship she had with President Trump which produced a child.'”

Kimmel then said the story is probably not true, before presenting a different option for who Trump may have had a secret love child with back in the day.

“If Trump did have a secret love child with an employee in the 80’s I’m gonna guess that the love child is Eric. And that employee is none other than Gary Busey,” Kimmel joked, as this image appeared on screen: 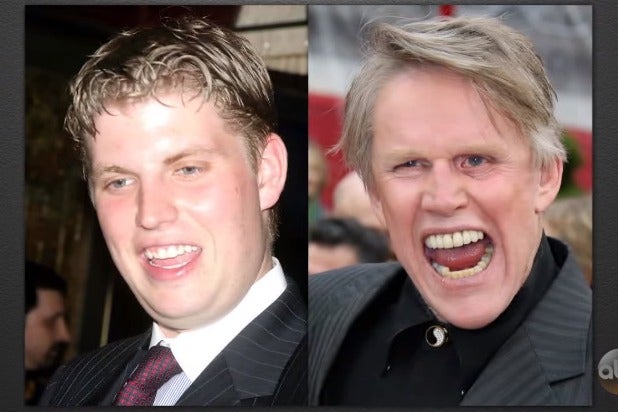 “The reason this all came to light in the first place is because of a story by the Associated Press — they said the doorman was paid $30,000 in what they call a ‘catch and kill’ deal. They pay someone for a story and then never publish the story. They bury it,” Kimmel said. “But if the story is true, there could be another Trump kid out there who would be an adult right now, which is crazy to think about–”

At this point, Kimmel was interrupted by a visitor, which prompted the subtle Hannity dig.

Also Read: Seth Meyers to Paul Ryan: 'You Gave Us Donald Trump. You Should Have to Live With Him' (Video)

Doorman: “Oh, nothing. I just wanted to say, I don’t think that it’s crazy to give your doorman a nice tip for keeping something quiet for you.”

Kimmel: “Really. What are you getting at exactly?”

Also Read: Kimmel on FBI Raid of Trump's Attorney: 'It's Never a Great Sign When Your Lawyer Needs a Lawyer' (Video)

Doorman: “Let’s just say for maybe $10,000, no one ever has to find out that America’s conscience, Jimmy Kimmel, was the host of a sketch comedy show.”

Kimmel: “What sketch comedy show are you talking about? I don’t know–”

Doorman: “A certain male-themed comedy show. If you get my drift.”

Also Read: Kimmel Ends 'Fun' Exchange of Jabs With Hannity: 'I Will Give My Words More Thought'

Kimmel: “Hold it, that’s not a secret. She’s my wife, I’m married to her, she works here. Her name is in the credits.”

Kimmel: “Yeah. Yeah. You’re right, we have sex. I think we had sex like two weeks ago. It’s not a thing. This is not a thing you’ve uncovered.”

Doorman: “Oh, okay. Uh, so you got some Amazon packages, should I just send those up?”

By the way, “America’s conscience” was a title bestowed on Kimmel last year by a column on CNN after he offered up some more serious commentary on his show about health care and gun control. That title has often been used with irony by conservatives commentators since then. Interestingly enough, Fox News previously pulled up that old clip from “The Man Show” back in October not long after that CNN column was published.

You can watch this entire bit in the video embedded at the top of this post.