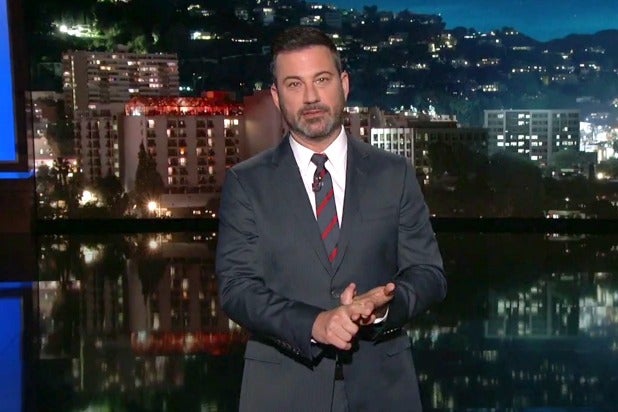 Late-night hosts were in a bit of a bind on Monday knowing that the big news of the day would break after they recorded their episodes while still needing to crack some jokes about it. But on Tuesday, they were able to go in on Donald Trump’s Supreme Court nominee, Brett Kavanaugh, which Jimmy Kimmel happily did.

“Last night, I don’t know if you watched, but President Trump made his pick for the Supreme Court. He chose Brett Kavanaugh,” Kimmel said to open this thread of his monologue, about six minutes into Tuesday’s “Jimmy Kimmel Live!”

“He narrowed his candidates down to three but, in the end, Brett Kavanaugh was the white man for the job,” Kimmel quipped, to the delight of his studio audience. “So he picked him.”

On Monday, Kimmel went with a generic joke in lieu of not being able to clown Trump’s actual pick, presenting doctored footage of Trump announcing that he was nominating Lord Voldemort to the Supreme Court. The subtext was that it didn’t really matter who Trump picked because anybody who Trump would approve of would be a terrible choice.

And on Tuesday, Kimmel said it again.

Kimmel then discussed one of the more interesting reports that emerged after Trump made his announcement — that retiring Justice Anthony Kennedy hand-picked Kavanaugh to replace him.

“But Judge Kavanaugh, this guy was a clerk for outgoing Justice Anthony Kennedy. And there is a report that President Trump may have made a secret deal with Kennedy, who agreed to leave if Trump agreed to replace him with Brett Kavanaugh, his friend,” Kimel said, before casting doubt on this idea.

“I don’t know if I believe — I mean let’s be honest. A secret deal requires two things Donald Trump is not capable of: keeping a secret and making a deal.”

Also Read: Colbert: Maybe We Should Get a Doctor Who Isn't 'a Pill-Popping Dealer Who Drank on the Job' to 'Test Trump's Brain' (Video)

Kimmel also had a joke at the expense of the Democrats who oppose the pick.

“So the Democrats, as you might imagine, are not happy. They have vowed to wage a fierce battle against the nominee. They are already preparing some very strong words,” Kimmel said.

“Even a few zingers I am told.”

You can watch Tuesday’s episode of “Jimmy Kimmel Live” on ABC.com here or on the ABC app.