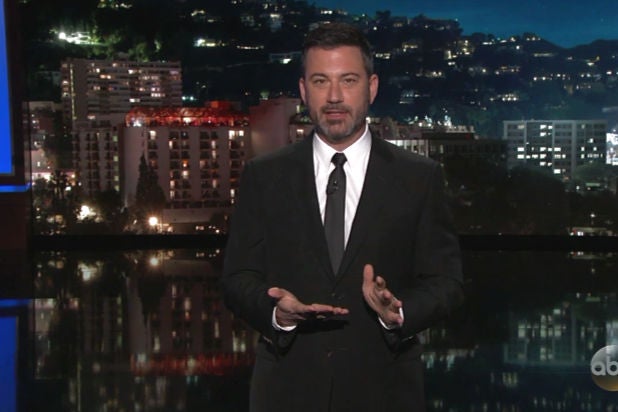 The big story Monday night, and probably for at least a few more days, is Donald Trump’s meeting with North Korean dictator Kim Jong Un in Singapore. The pair’s first meeting took place after all the late-night shows taped on Monday night, but Jimmy Kimmel got out ahead of it anyway with some jokes about the run-up to the meeting and how he thinks they’re going to get along great because they’re both so horrible.

Kimmel led into the jokes about the Trump-Kim summit by opening his monologue with jokes about how inexplicable it was that Trump managed to ruin the G7 summit over the weekend.

“For whatever reason, Donald Trump seems determined to become friends with our enemies and enemies with our friends. He’s in Singapore right now. He’s scheduled to meet Kim Jong Un tonight. This was good. When Trump arrived in Singapore overnight, Fox News delivered what might be their most fair and balanced assessment of this presidency to date,” Kimmel said.

Also Read: Colbert Hopes That However Russia Is Blackmailing Trump, It's With Something Bigger Than the Pee Tape (Video)

“Jimmy Kimmel Live!” then played a clip of “Fox & Friends” host Abby Huntsman referring to “that meeting between two dictators,” a comment she would later apologize for.

“Kim Jong Un arrived in style with a team of bodyguards that run alongside his car. It’s fine in the city. On the freeway, it’s a problem. But why they do this I have no idea. How does that protect him? If there’s trouble isn’t the car just going to speed away and leave a bunch of sweaty guys in suits jogging?”

Kimmel then gave his semi-serious analysis of how he expected the meeting between Trump and Kim to go.

“Tonight’s meeting will be one-on-one with a couple of translators, and that’s it. Trump said he hopes that he and Kim Jong Un like each other. Which, Kim Jong Un is a brutal dictator who starves his people and murders his political enemies. They’re definitely going to like each other,” Kimmel said, before dropping a “Bachelor” joke.

“They might even fall in love. My hope is that the summit ends with Trump giving Kim Jong Un a rose and Kim Jong Un eating it.”

You can watch Monday’s episode of “Jimmy Kimmel Live” now on ABC.com or in the ABC app.