Kelly frames Lockhart at a distance in mirrors and door frames throughout “King Cobra,” which gets across how he is the object of desire both to Stephen and to himself. (Take note of the pitiful little crooked lamp shade next to Lockhart in one early shot where he is sprawled on a bed.) Stephen gives Lockhart the stage name Brent Corrigan and tells him, “It’s fun to play with who you are, don’t you think?”

In the sequence where Brent turns the camera on Stephen and the older man admits to a lonely and repressed adolescence, Slater hits just the right pitiful note as he says, “Please just make me feel wanted” before coercing Brent into having sex with him. The sex here is emotionally charged and revealing because Stephen can’t see (or doesn’t want to see) how uncomfortable Brent is with this exchange, but the camera does capture what Brent is feeling, resulting in a rare sex scene that expresses what’s going on with the characters better than any dialogue could. 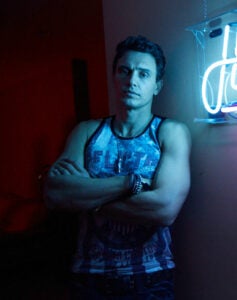 When Corrigan takes a business meeting with Joe and Harlow in a Japanese restaurant, Kelly wisely lets their initial talk play out in a long take where the camera steadily inches closer to them, an effective stylistic change that lets us know something is about to give or break. The scene where Harlow auditions for Stephen, which leads up to the killing, is very disturbing because Allen goes much farther with the physical and verbal sexual come-ons than you would expect in a mainstream movie.

It is made clear in the scenes that Brent shares with his flaky, loving mother (Alicia Silverstone) that he likes having sex on camera and only dislikes the exploitative situation that he is in with Stephen. In the sexy and amusing final scene, after a movie-long tease, Kelly finally lets Corrigan show us his most noted asset– complete with star tattoo–and this is so funny and suggestive because Clayton manages to look a lot like Corrigan but he also uncannily resembles his fellow Disney Channel alum Zac Efron in look and manner.

The surprising thing about “King Cobra” is that it winds up being a sex-positive movie that’s sympathetic to Corrigan while also poking some gentle, loving fun at him and committed to fully exploring the sadder fates of the three other men who came to their doom in his sunny presence.