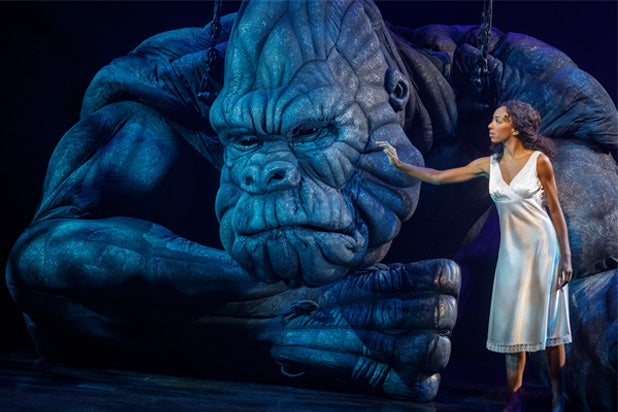 The big ape deserves a Tony. He’s not only the star of “King Kong,” which opened Thursday at the Broadway Theatre. He’s also a damned good actor, too — one who shows a wide range of emotion while running through the jungle, fighting off a giant serpent, being gassed by crass capitalists or climbing up the Empire State Building.

That he’s a puppet only makes his performance all the more riveting. But he/it has an advantage over the human actors on stage. Kong doesn’t sing one song composed by Eddie Perfect or utter one word written by Jack Thorne.

Before we get to the technical wonder that is this puppet named Kong, let’s look at Thorne’s rollercoaster career on Broadway in the last few months. Back in June, his “Harry Potter and the Cursed Child” won the Tony Award for Best Play. This November, he gives us arguably the worst book of any musical currently on Broadway. In comparison, Kong’s fall from the Empire State Building looks like a mere stubbing of the big toe.

Perhaps Thorne and his producers found the original 1933 film a teensy sexist and racist? So how have they fixed that? Ann Darrow (Christiani Pitts), the erstwhile damsel in distress,  no longer has a human love interest, Bruce Cabot, to get in her way.

Nor is there a hostile tribe on Skull Island to greet her and the film crew led by bad-guy showman Carl Denham (Eric William Morris). Instead, they have to fight off killer vines in the jungle. And since there is no hostile tribe, there is no wall to prevent Kong from abducting Ann or taking a whiz in the nearby sea.

The Disney princess has a lot to answer for here. We have watched this smart, spunky, athletic, defiant, feisty and independent female character evolve over the years. Although the House of Mouse has nothing to do with “King Kong,” the new version of Ann Darrow perfectly crystallizes what all those previous princesses have been aspiring to: She doesn’t need or even want a love interest — at least, not a human one. She is totally self-sufficient. She can do it on her own.

In fact, Ann Darrow not only saves her own life in the jungle, she singlehandedly stops a mutiny on the ship that’s taking her and Denham to Skull Island. I’d like to explain how she squashes this uprising, since the spirited Darrow is surrounded by a dozen armed sailors and she’s holding a curling iron, but I can’t. The scene is a baffling mess, and I no longer feel stupid for having found much of “Harry Potter and the Cursed Child” incomprehensible.

In the second act of “King Kong,” Denham gets fed up with his Ann when she refuses to scream on cue at the appearance of Kong in the Broadway stage show he’s directing. But since she really didn’t act afraid back on Skull Island, why would she scream now? It had always been love at first sight for Ann and the ape. But isn’t “King Kong,” first and foremost, a tale of terror? And without terror, “King Kong” quickly turns into “Curious George” — only bigger.

Eddie Perfect has provided a few female-empowerment anthems, lifted from the “Defying Gravity” school of musical songwriting. These are the songs that compel many theatergoers to break into applause before Pitts has finished singing. Is this applause to signal that we can still hear or, better yet, that we can no longer hear the banal lyrics? Perfect is big on the percussive.

These songs are supplemented with a score by Marius de Vries that fortunately offers no words but does set the mood in a very ponderous action-movie sort of way. The musical interludes have been given titles: “The Ascent,” “The Descent,” “Kong’s Capture,” “NYC Chase,” “Empire Ascent,” and “Air War,” which offer in specificity what Perfect’s lyrics lack in originality.

Pitts and Morris have no characters to explore, so they can’t be blamed for acting merely energetic (her) or determined (him). The two lead characters, however, are spared the whiplash changes in personality that afflict the crewman played by Eric Lochtefeld. He’s called Lumpy. Like de Vries with his music titles, Thorne gets right to the point with his choice of names.

Initially stupid and clumsy, Lumpy soon comes to represent all that is good in the world when he convinces Darrow to turn on Denham and punch him out — to much applause from the theatergoers who can still hear dialogue being spoken.

“King Kong” is the third Broadway musical this year, after “Escape to Margaritaville” and “Frozen,” to advocate that the heroine settle her differences with a man through physical violence. The one good thing we can say about Darrow is that she, unlike her two Broadway sisters, doesn’t actually deliver on such misandric advice.

But back to the super-puppet. As designed by Sonny Tilders, Kong is a genuine marvel that requires no fewer than 10 people to operate its limbs, torso and, most amazingly, facial features. The whole contraption is humongous but always agile, and whenever the story line lags, which is most of the time, your attention goes to those 10 puppeteers whose task often takes them up Kong’s back to attach hooks and wires and then rappel to the stage floor. No zoo offers a show this thrilling.

While Pitts and Morris are often stranded on stage with weak material, Kong never operates in a void. Enhancing all his chases and escapes is the inspired work of Peter England (scenic and projection design), Peter Mumford (lighting), Peter Hylenski (sound), Gavin Robins (aerial movement) and Artists in Motion (video and projection imaging content).

There is also the director-choreographer, Drew McOnie. He can’t do much with the book scenes or the songs, but his very athletic choreography often provides stunning segues. And he sure knows how to serve up a real star.