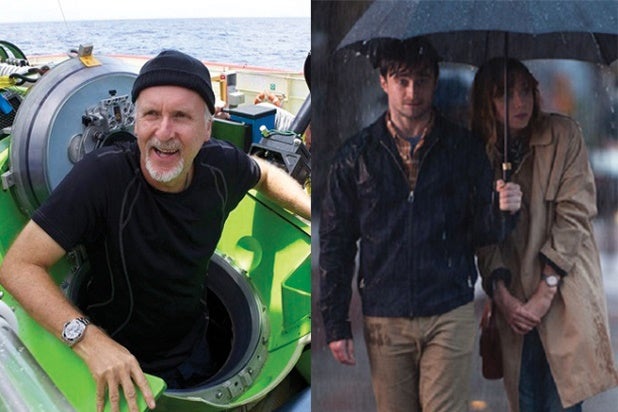 James Cameron and Daniel Radcliffe, two guys who know their way around a blockbuster, are opening more intimate — and very different — movies at the specialty box office this weekend.

Cameron is of course the writer and director behind and “Avatar,” the two highest-grossing movies of all time at the worldwide box office. On Friday, “James Cameron‘s Deepsea Challenge 3D” opens in 304 theaters nationwide.

Radcliffe, who played the bespectacled young hero in the hugely popular “Harry Potter” movies, opens in the romantic comedy “What If,” which CBS Films will have in 20 theaters in 10 markets.

Cameron’s film documents his quest to get to the deepest spot on Earth via a 24-foot, one-man submarine that he takes to the Pacific’s deepest depths. He goes more than seven miles down — deeper than the height of Mt. Everest, or the final resting place of the Titanic.

With “What If,” in which Radcliffe stars with Zoe Kazan, he may be taking on a challenge nearly as daunting: connecting with a romantic film comedy, a genre that has lost some favor in Hollywood over recent years, and has been a mixed bag at the box office for this year’s handful of rom-coms.

Zac Efron’s “That Awkward Moment” opened to $8.7 million in January and has topped out at $40 million worldwide for Focus Features; Sony’s Kevin Hart-starring “About Last Night” brought in nearly $49 million after opening to $25.6 million over Valentine’s weekend.

Adam Sandler and Drew Barrymore’s “Blended” rang up a soft $45 million domestically, but has taken in another $72 million from overseas for Warner Bros. The Weinstein Company’s “Begin Again,” with Mark Ruffalo and Keira Knightley, has brought in $21 million since opening in late June.

No one is expecting Potter-esque returns from “What If,” but CBS should be able to turn a profit on the film, which it acquired for roughly $2 million at last year’s Toronto Film Festival. The critics like it– it’s at 73 percent positive on Rotten Tomatoes — but it’s a definite counter-programming play, particularly in summer when superheroes and sequels rule the multiplexes.

Cameron is currently working on three “Avatar” sequels for Fox, the first of which is due in theaters at Christmas 2016.