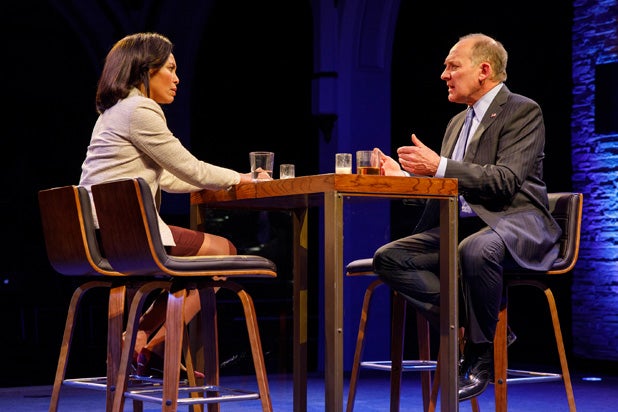 Mrs. Smith goes to Washington in Sarah Burgess’ new play, “Kings,” which opened Tuesday at the Public Theater. Rep. Sydney Millsap (Elsa Davis, “House of Cards”) is as high-minded as James Stewart’s senator but much tougher. The joke of Frank Capra’s 1939 classic movie is that, while Stewart’s character meant well, he’s essentially incompetent, and that the government’s in better hands with the corrupt politicians, who are, at least, smart.

Millsap is definitely smart and competent, and in the first few scenes of “Kings” she’s also rather unsympathetic in her blithe dismissal of the people around her. Those people, however, are lobbyists (Aya Cash, “You’re the Worst” and Gillian Jacobs, “Community”), and so the representative’s harsh attitude is more than understandable.

Burgess cheers on her congresswoman. In fact, Burgess lets Rep. Millsap win every argument, whether it’s with the two lobbyists or the corrupt senator (“The Good Wife” alum Zach Grenier, slightly more prickly than Claude Rains in “Mr. Smith”). Clearly, we are supposed to be shocked, just shocked, that politicians have to spend so much time attending fundraisers and sucking up to lobbyists, who are the real power in D.C.

Burgess’ talent as a playwright is that she’s able to explain why carried interest should not be treated as a long-term capital gain. The dialogue is often scintillating, and would be even more arresting if any of the characters budged from his or her original position. “Kings” is a play that needs more characters, if only to see how Millsap speaks to people she doesn’t despise. Does she use that same chilly, clipped, dismissive speech with her constituents, her assistants or like-minded politicians? Or does she defrost around them?

Some fake news takes on viral life near the end of “Kings,” the impact of which is introduced and then resolved in two quick scenes. As with her previous play, “Dry Powder,” Burgess writes in short scenes that resemble a screenplay.

Thomas Kail is again on board as her director, and again he sets Burgess’ play in what appears to be a discotheque. Between scenes, Anna Louizos’s set pulses with colorful flashing lights, by Jason Lyons, and Lindsay Jones’ original music and sound design make us want to get up and dance. No matter that the action takes place in a ski lodge and a Chili’s restaurant, among a few other equally mundane places. Is Kail telling us that the world of private equity (the subject of “Dry Powder”) and D.C. lobbyists is heady but vapid? It’s a audio-visual trope employed in other like-minded plays, ranging from “Enron” to “Junk.”

Percolating around the edges of “Kings” is one provocative notion. Davis presents a very no-nonsense adult in her impersonation of a politician. Playing the two lobbyists, Cash and Jacobs are very much the girlish arrivistes who like to gossip and one-up each other with compliments about their outfits.

These two younger women don’t yet have Millsap’s poise and stature — they’re physically smaller, to boot — and they’re both lesbians. Burgess doesn’t make much of the two characters’ sexual orientation; the two lesbians, on the other hand, often condescend to Millsap by pointing out to her that she’s a successful woman of color. D.C. runs on such worker bees, eager to wield the power but remain on the sidelines.