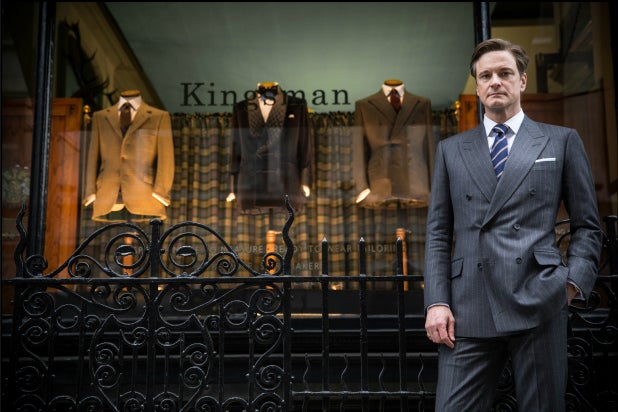 The fifth and, yes, best film from director Matthew Vaughn (“Layer Cake,” “X-Men: First Class”), “Kingsman: The Secret Service” is a startlingly enjoyable and well-made action film leavened by humor and slicked along by style, made by, for, and about people who’ve seen far too many Bond films.

Fleet-footed and unrepentantly British, it’s a reunion of sorts behind the scenes for Vaughn and comics writer Mark Millar, but it’s infinitely better than their 2010 collaboration “Kick-Ass.” Credit for that goes to Vaughn’s adaptation of the script alongside producer Jane Goldman, which finds cheer and cleverness in Millar’s mixture of retro-style spy action with a snobs-versus-slobs twist.

The basics are basic indeed: Super-spy Harry Hart (Colin Firth, surprisingly capable and up for it), obligated to recruit a new member for the independent spy group from which the film takes its name, chooses the grown-but-aimless son of a late comrade, Gary ‘Eggsy’ Unwin (Taron Egerton). Eggsy is put through his paces as a potential spy even as Hart investigates whether telecommunications mogul Valentine (Samuel L. Jackson, playing a mix of Russell Simmons and Bill Gates by way of Blofeld with a comedy lisp) is the target of a round of kidnappings and killings or if he is, in fact, the mastermind behind them.

With its fashion-forward flair — the film may borrow liberally from the Roger Moore 007 era, but there’s also a touch of Patrick Macnee’s bespoked gentleman spy Mr. Steed from “The Avengers” — “Kingsman: The Secret Service” feels like a well-made gentleman’s suit, with superb cut, distinctive color, and excellent construction.  In terms of cut, the film’s style is precise and yet broad, with the hidden lairs, jump-suited minions and maniacal villains of a long-gone era of Bond movies, perfectly walking the fine line of mocking what it loves and vice versa. You get the gear, the gadgets, and the gusto, but you also get sly winks at how ludicrous it all is; it’s a movie that fakes a stiff upper lip but also constantly raises its eyebrow in amusement.

In terms of color, important for both a film and a men’s ensemble, Vaughn has cast his film fairly perfectly. Firth is game and great in his computer-aided fight scenes and his dialogue delivery, with Egerton a naturally charismatic presence with smarts behind his smile. Mark Strong plays gadgetmaster Merlin, while Michael Caine is briefly brilliant as the head of Kingsman. Jackson goes for broke and strikes riches as Valentine, supported by henchwoman Gazelle (Sofia Boutella), who sports a pair of sharpened-and-bladed prosthetic legs as divinely mad as any deadly dentures Richard Kiel ever wore as Jaws. The score, by Henry Jackman and Matthew Margeson, offers perfectly fun pastiches of John Barry’s iconic work on the 007 films.

As for the construction, it’s superb. The action may be ludicrous, but it’s also engaging and delightful; the production design is all tributes and nods to other films and other bits of pop culture, but “Kingsman” also creates a coherent world for itself. The script’s tone, with a few notable disappointments, is also zesty but rarely sour, knowing yet rarely cynical. The British-isms aren’t sanded down for an American audience; Firth is a killer, but never a brute and Eggsy’s up-from-the-bottom determination to do good is clear in every scene, even as Egerton demonstrates charm in his acting and skill in his action work.

And yet, much like “Guardians of the Galaxy,” “Kingsman” is marked and marred by a small group of scenes and decisions as regrettable and ruinous — and, more frustratingly, removable — as a garish mess of a rumpled pocket square or a soup-splattered tie. Specifically, it’s another action film that feels it can get cheap laughs out of language and attitudes that insult women and women’s sexuality in the name of amusing the audience in the basest way, and so late in the game that it casts a pall over the fun that’s gone before. Is it too much to ask for an action film that doesn’t find coarse comedy about women and sex as obligatory as squibs, explosions, and product placement?

There’s a lot to like about “Kingsman: The Secret Service,” and even the stain of its sexism can’t rip the seams of its clever patchwork or wrinkle the creases in its smarts.