While big league movies from the official Cannes lineup arrived at TIFF with distribution in place -- think "Antichrist," "Broken Embraces" and "Fish Tank" -- several smaller movies from the festival's sidebar came to Canada without a steady future in place. 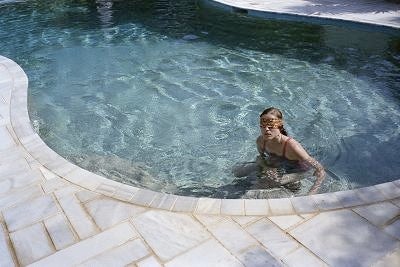 One of these, a Greek thriller called "Dogtooth," was among my favorites at Cannes. The movie, which won Camera D'Or prize at Cannes, played at TIFF earlier this week. It follows a frighteningly controlling family in an undefined setting, where the children never the leave the house and constantly engage in nightmarish games to keep them hooked into the strange lifestyle that their parents force upon them.

A gripping, fable-like drama, the movie hardly received much attention at Cannes in the Un Certain Regard sidebar, even after it won an award.

I'm happy to report that it sounds like "Dogtooth" may come soon to a theater near you.

Some of you, anyway. During an interview on Sunday, director Yorgos Lanthimos  revealed that Kino International is close to finalizing a deal to distribute the movie in the United States. While it certainly won't receive a wide release, just the fact that "Dogtooth" will soon become accessible to American audiences means that this insightful movie has a shot at broadening its appeal to a wider audience.

With its Orwellian plot, the movie has the potential to spark debate, but Lanthimos told me that was never the original plan. "I never thought about the family as an allegory for society or government, but I know it works that way," he said. "It's easy to associate it with that, and that's okay."

Nevertheless, his back story for the project suggests a deeper element to its commentary. "Many of my friends were getting married and having children," he said. "I was making fun of them and they were getting really defensive. When I saw them become like that when I joked about their children and their families, I thought about what someone would do to protect their family together forever."

Expressing his dissatisfaction with the meager filmmaking community in Greece, Lanthimos said he would consider making a movie in the U.S. --

and has already explored a few possibilities. For now, however, he and his writing partner plan on writing a new screenplay and playing it by ear. "I think it's better to be concentrated on one thing right now," he said.