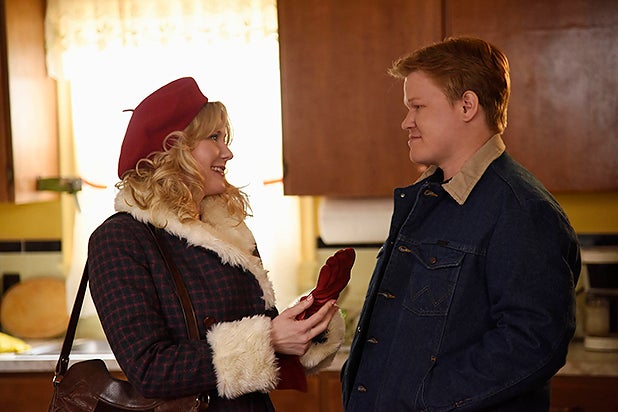 The characters played by Jesse Plemons and Kirsten Dunst on Season 2 of FX’s “Fargo” may have seem hapless and unassuming, but their story is already taking a decidedly dark turn two episodes in.

After accidentally hitting a man with her car, Peggy (Dunst) panicked and took him home, only for her husband, Ed (Plemons), to finish him off when he turned out to be not quite as dead as first expected.

Now that they’ve deliberately killed a man — twice — the married couple decide to cover it up themselves, grinding up the body in the meat shop where Ed works. Little do they know, the man they hit is the beloved son of a very powerful local crime family.

If this sounds like an insanely bad idea, you’re not alone. Dunst finds Peggy’s behavior pretty crazy too.

“She’s definitely delusional, that’s for sure, 100 percent,” the actress told TheWrap. “Nobody with rational thought process would do what she does.”

As Ed and Peggy continue to dig themselves deeper and deeper into a hole they might not be able to get out of, Dunst discussed Peggy’s motivations, how Ed and Peggy’s story is actually a love story, and a piece of material left on the cutting room floor that helped her understand her character.

Also Read: Kirsten Dunst Tells Jimmy Kimmel How She Gained Weight for 'Fargo': 'I Ordered a Lot of Pizza'

We have to start here: What the hell was Peggy thinking?!
In my brain, when Peggy gets out of the car, she’s trying to decide whether to take him to the hospital or the police station. Like, “What do I do?” And then when she gets back in, she thinks she’s going to go home and decide there and make the decision there. So that’s what was going through my head, she was just so overwhelmed by what happened that she didn’t know what to do, that it was just like a mental block.

Ed and Peggy seemed like a pretty normal couple at first but almost immediately there’s all this craziness. How much darker and more twisted will we see them get?
The thing about them is, it’s almost like a love story in a way. It’s about what he does for her and what she does for him. It just brings them closer together in the end. I think of them as a very dopey Bonnie and Clyde.

It’s so funny that Peggy just thinks she’s going to get away with this. She’s so blinded to who she actually hit, who this family is. She’s just so focused on going to Life Springs that she thinks that covering this up is not going to be a big deal. And then she just obviously digs herself deeper and deeper and brings Ed along with her.

What do you think the origin of Peggy’s warped thinking is?
She represses a lot of stuff and it comes out in really odd behaviors. In a previous draft of Episode 2 — we never shot it, but Peggy was coming into the butcher shop with her fiance, and the fiance tells Ed to take care of Peggy if anything happens to him since he’s going to the Vietnam War. So clearly she has like major trauma in her past, that led her to become a little bit of hoarder, and things like that.

So even though you never shot that scene, you take it as part of her history.
I do, yeah.

What do you think is behind this drive to go to this women’s empowerment seminar? It’s great that she wants this better life, but she really seems to be doing everything the wrong way.
Yeah, she is. Once this trauma happened, this accident, it’s like she had this plan and now she’s not going to let it disrupt her course. Life Springs to her is the way, the tools that she’s going to get there is going to facilitate her dreams. She doesn’t have that support in Minnesota so she thinks going to this course is going to help her open the doors to her mind, to go to Hollywood or wherever she wants to go. And maybe become a celebrity hairdresser in her mind or something.