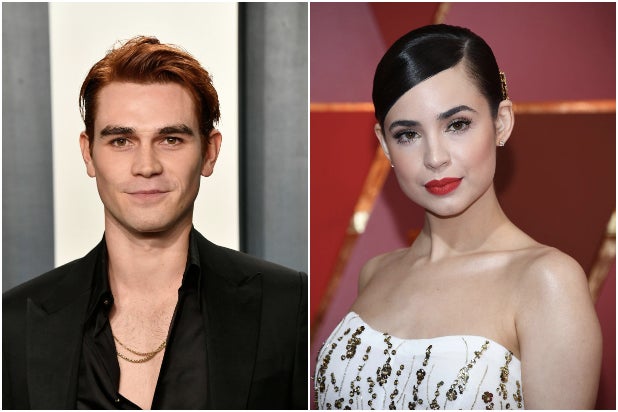 Though principal photography already kicked off in Los Angeles last week on the pandemic-themed thriller “Songbird,” the movie produced by Michael Bay and Adam Goodman has found its two leads, “Riverdale” and “I Still Believe” actor KJ Apa and singer and “Feel the Beat” star Sofia Carson.

Apa and Carson join a cast that already includes Demi Moore, Bradley Whitford, Craig Robinson, Jenna Ortega, Paul Walter Hauser and Peter Stormare, but Apa and Carson lead the cast in a film that is centered around their love story. Here’s the full, newly released synopsis:

Told from street level through the eyes of the characters, “Songbird” takes place two years into the future, as lockdown has been re-implemented after a more serious virus continues to mutate. In a feeble attempt to keep the sickness contained, the city has been bisected into haves and have nots. The film centers around an essential worker (Apa) who has a rare immunity, a delivery man who delivers goods and hope throughout the city. Like the vast majority of the population, his girlfriend (Carson) is locked within her home, and the couple have no ability to physically be together. To be with the one he loves, our hero must overcome martial law, murderous vigilantes and a powerful, well connected family, helmed by a matriarch (Moore) who will stop at nothing to protect her family and maintain her way of life. “Songbird” is a story about the resilience of the human spirit and the idea that hope is worth fighting for.

“Songbird” is directed by Adam Mason (“Into the Dark”) and is being self-financed by Invisible Narratives, which is led by former Paramount production chief Adam Goodman and former Disney exec Andrew Sugerman.

SAG-AFTRA at first issued a Do Not Work notice against the film, but the guild has since lifted that restriction. It’s one of the first projects to go into production since stay at home orders began and production was shuttered back in March. The film is meant to shoot using creative camera techniques so that actors would not have face-to-face interaction with one another while on camera, with actors and crew separated as filming takes place.

KJ Apa was recently seen starring as Jeremy Camp in Lionsgate’s “I Still Believe.” His other credits include “The Hate U Give” and “The Last Summer,” and he is widely known for his role in “Riverdale.”

Sofia Carson has over 18 million followers on social media, over 1.5 billion streams of her music and over 2 million subscribers to her YouTube channel. Carson currently stars in the Netflix film “Feel the Beat.” She also stars in “Descendants” and “Pretty Little liars: The Perfectionists.” She’s also a singer known for her latest single “Miss U More Than U Know.”

ICM Partners and Endeavor Content are handling worldwide sales for the film.