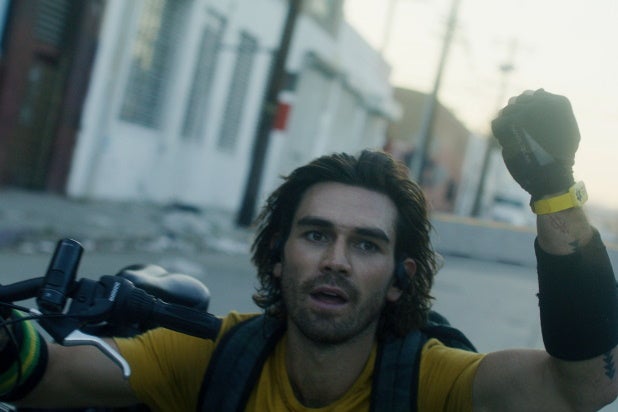 “Songbird,” the pandemic thriller starring KJ Apa and produced by Michael Bay, will skip theaters and now debut as a premium video on demand title on December 11.

The film from STX will be available for a 48-hour rental period for $19.99 and then will drop on an unannounced major streaming service in 2021.

“Songbird” was filmed in Los Angeles entirely during the pandemic. It’s a sci-fi thriller that imagines a near future in which lockdowns have extended as a deadly virus has continued to mutate. Apa stars as a delivery man who is immune to the virus and is one of the few who can safely travel from place to place, all as he desperately tries to keep a connection with his love, played by Sofia Carson. Check out the trailer for the film here.

STXfilms’ “Greenland” starring Gerard Butler is also skipping theaters during the pandemic as more and more distributors either push back their tentpole releases or go to a digital release model. That film will open in December, but it will first get a theatrical release in China on Nov. 20. STX upcoming also has the Karen Gillan action film “Gunpowder Milkshake.”

“The pandemic has affected every aspect of our business, from production to release, but ‘Songbird’ demonstrates that a nimble studio like STX can find effective and profitable ways to make their movies work, as we have similarly with ‘Greenland’ and ‘My Spy’ during these challenging times. The show must go on. ‘Songbird’ is a thrilling movie that will speak to audiences in this moment as it keeps them on the edge of their seats,” Adam Fogelson, chairman, STXfilms Motion Picture Group, said in a statement.