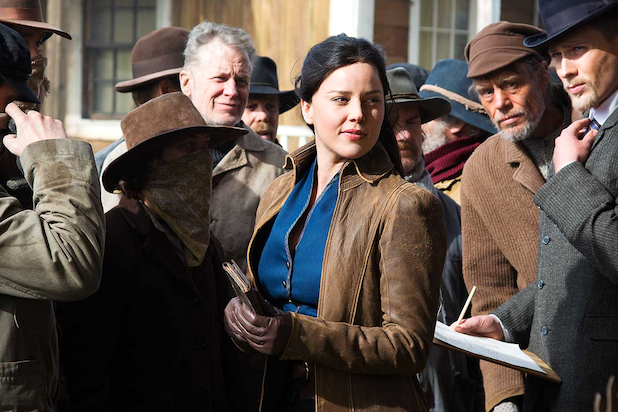 Abbie Cornish steps into the boots of the “richest woman in Klondike” for Discovery’s first scripted miniseries, the three-part period drama, “Klondike,” getting underway Monday.

“It’s all real,” Cornish told TheWrap. “Belinda Mulrooney had the most real estate of anyone else in Dawson City. She ran the lumber mill and the loan shop.”

Instead of digging for gold herself, Mulrooney provided items and services that the prospectors would need. That was the key to her success. She would go on to build a restaurant, a roadhouse and a hotel in Dawson City.

“I was very particular,” the Australian actress said of her approach to the role. “I kept on saying I’m playing Belinda Mulrooney through and through. I wouldn’t miss a beat. So, if anything came up in the script that I knew wasn’t right, we talked about it. I was very honorable towards her, because I feel like a woman like that, you want to tell the story honestly.”

Based on Charlotte Gray’s book “Gold Diggers: Striking It Rich in the Klondike,” the period drama begins in 1897 and follows several strangers and their collective fight for survival and wealth during the last great Gold Rush in our history.

TheWrap: Describe what it’s like in Dawson City when the miniseries takes place?
Abbie Cornish: It does feel like every man for himself. There is this feeling of keep your friends close, your enemies closer. So, you’re always looking over your shoulder. You don’t know who to trust, who has your back and who doesn’t. It’s sort of a metaphor for humanity. Because if you’re in Dawson City, there’s a bunch of dirty people. But, if someone comes through with some “gold,” with a heart, with honesty, they shine out and it’s valuable. Finding the gold in the dirt is a nice metaphor for human nature in a place like that.

Bridget sees something in newcomer Bill (Madden). What do you think that is?
I think she sees someone who can, of course, go down different paths. She knows what that city does to people. She sees the good in him and she doesn’t want to see it get thrown into the dirt, to let the wolves get at it. I think she doesn’t want to see him end up like all the other guys or washed up dead on the street.

There’s quite a physical transformation for you. Was suiting up part of how you got into character?
All that’s done by hair, makeup, art direction, set design, so all an actor has to do is bring themselves and bring the mental and spiritual work. You have to present a character wholly and justly, without judgment, without fear and freedom. And when I say freedom, I mean in the realms of creativity. So in regards to Belinda, you accumulate all the research and then you just let things inform you. You put on a certain outfit and it makes you feel a certain way.

That was a wig, right?
The long dark hair was a full wig, so that was a very different thing for me.

What’d you enjoy most about the role?
You’re pushing and pulling within you to either expand or shrink parts of you to bring the character justice. And Bill and Belinda, we got really lucky. We were pushed to pretty amazing places, places of strength, places of a warrior nature, places that were very elemental and very guttural, which is a nice place to go even when it’s dark places.

Part 1 of “Klondike” premieres Monday at 9/8c on Discovery.