Flipping through a fashion catalog or a handsomely mounted design book has its diverting joys. But “Knight of Cups,” Terrence Malick‘s attempt to render a dapper, rudderless movie writer (Christian Bale) wandering an Antonioni-esque Los Angeles into something navel-gazingly cinematic, winds up as mainly an art browse, even with all its visual resplendence.

It’s the movie equivalent of a multi-course banquet of colorful foams: wisps of flavor emerge here and there, and admiration reigns, but in the end you’re unlikely to believe you’ve actually had a meal. With the trappings of conventional narrative and believable humans of increasingly minor concern to Malick — whose last effort was the mostly incomprehensible tone poem “To the Wonder” — a movie like “Knight of Cups” only reinforces the sense that the reclusive master is content to brushstroke his way through movies.

Whatever religious or philosophical ideas he has about a questing man’s place in the world, by the time you’ve seen the fifth beautiful, lithe woman in flowing fabrics spinning around Bale, “Knight of Cups” starts to read more as a fleeting fetish epic than a powerful meditation.

The familiar Malick heavy-osity starts right away: Between bursts of ponderous Ben Kingsley narration, hovering classical music, and, later, snippets of Charles Laughton reading “The Phaedrus,” one has no trouble grasping that Bale’s menswear-conscious screenwriter Rick is a lost soul searching for his true self. That’s because he’s the solemn-faced, solitary observer in every environment, whether it’s his modernist Venice condo during an earthquake, a decadent rooftop party populated by flitting, scantily clad young women (and at one point a guy led around on all-fours, a la “La Dolce Vita”), the empty backlot of a studio, or the wilds of Las Vegas.

(The other identified inspiration, heard at the beginning, is “The Pilgrim’s Progress,” read by John Gielgud, which Malick attaches to a view from space of the aurora borealis. Potheads, start your engines.) 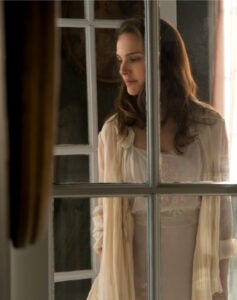 As Rick meanders through a Los Angeles of gleaming urban surfaces, hollowed interiors and palatial expanses, key figures in his life glide into frame like blown leaves, giving the sense that he’s assessing his past while simultaneously contemplating his future. His hot-headed brother (Wes Bentley) is still seething over the treatment they endured at the hands of an autocratic father (Brian Dennehy), while Rick continues to lament the loss of another brother who died.

The women in Rick’s life, meanwhile, segment the film like a parade of ephemeral pleasure and regret. These include his compassionate but fed-up doctor ex-wife Nancy (Cate Blanchett), and a married woman (Natalie Portman) with whom he has an affair, but also an assortment of fleeting romances so interchangeably ethereal they verge on parody: a holistic model (Freida Pinto), a fun-loving stripper (Teresa Palmer), and a pair of bracketing enigmas suitably twirled into mythopoetic being by Imogen Poots and Isabel Lucas, even if they’re ultimately of little connective resonance to the elliptical goings-on.

As in “To the Wonder” with its nearly non-speaking lead Ben Affleck, Bale is more a silent, melancholic presence – usually seen from the back — than forthcoming protagonist, which means sussing out any given relationship in the film is a combination of moviegoer guesswork (why is Wes Bentley wielding a machete?) and economy of performance. Not surprisingly, Blanchett’s scenes feel the most emotionally illuminating, anchored as they are by her expressive features and naturally communicative physicality. Her merest gestures signal a doomed marriage more cogently than any of the umpteen shots of chilly architectural blankness.

When Malick’s free-flowing, spiritualized direction is in sync with three-time Academy Award-winning cinematographer Emmanuel Lubezki’s world class eye — this is their fourth collaboration, the fifth will be the upcoming “Weightless” — then the space on screen is one that feels tangible yet non-literal in the best way. Such describes a loopy Hollywood bacchanalia at the estate of a producer (Antonio Banderas), a Fellini-esque sequence which simultaneously feels artificially decadent and yet true to the aura of a fragmented Tinseltown soul in perma-mingle. That it’s dotted with a peculiar assortment of recognizable partygoers – Ryan O’Neal, Bruce Wagner, Joe Manganiello, comic actors Joe Lo Truglio, Nick Kroll and Thomas Lennon – only adds to the weird celeb-stew authenticity of it all.

Occasionally other scenes tantalizingly blur the line between present experience and memory – it’s never entirely clear whether or not Dennehy’s stooped, grizzled patriarch is a figment of Rick’s imagination, for example – but it’s rarely the kind of mystery you care to solve. There’s an airiness you can’t get past.

As “Knight of Cups” nudges along, Malick’s aesthetic tics (water imagery, textures, wide angles, roving camera) cease to feel big or small, just repetitive. The title is a reference to the tarot card that depicts an unrestrained romantic, rife with inspiration, but hampered by distractions. That’s not a bad jumping-off point for an L.A.-based story of creative limbo and divine madness. But “Knight of Cups,” while never exactly draggy – thanks to a riot of imagery, including one breathtaking underwater shot of a dog’s jaws searching for a ball — only captures the distraction.